THE STATE(S) OF ELECTRICAL ENERGY

AN ARTICLE IN The New York Times, December 24, 2018, by Nadja Popovich, asks “How Does Your State Make Electricity?” Alas, its graphics seem not to be reproducible here. Instead, I offer textual tidbits gleaned from the graphs and their comments.

Natural Gas on the Rise. Back in 2006, in terms of U.S. electric power generation, natural gas took second-place national honors away from nuclear power. During 2015, natural gas edged out coal as the country’s leading source, albeit by a close margin: For 2017 (the most recent full accounting), natural gas produced 32 percent of our electricity, coal accounted for 30 percent. The benefit, of course, is that natural gas is a lot cleaner than coal, even “clean” coal (which is akin to “clean” diesel). 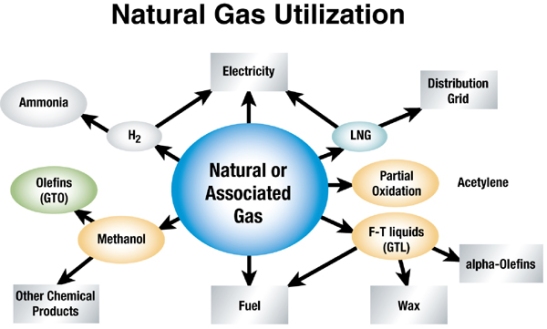 Natural gas, an abundant resource in the U.S., has many paths of usage. Image from oilgasmonitor.com.

Nuclear is third nationally, at 20 percent in this most recent accounting. Hydroelectric is fourth at 7 percent; wind, fifth, at 6 percent.

The U.S. Still Loves its Coal; West Virginia, Especially. Nearly all of West Virginia’s electric power, 93 percent of it, comes from coal. Wyoming is at 86-percent coal dependence; Missouri is at 80 percent. Kentucky is high on the list too at 78 percent; so are Indiana (73 percent), Utah (70 percent), North Dakota (64 percent), and Nebraska (60 percent). For 2017, 18 states still have coal as their main source of electricity generation. However, as recently as 2001, it used to be 32 states.

Nevada is a Trend Setter. In 2005, Nevada was one of the first states in which natural gas surpassed coal. In 2017, the state continues to be a trend setter: Solar is second in Nevada at 12 percent, geothermal is third at 9 percent. Coal continues to be on the decline.

Iowa is Windy; its Coal Smoke Diminishes. Over the past decade, Iowa’s wind power has increased from around 8 percent to 2017’s 37 percent. Coal remains first, at 44 percent. Nuclear edges out natural gas, at 9 percent versus 8 percent.

Is Hydroelectric Power Renewable? Hydroelectric has been big in the Northwest for years. And, for 2017, Maine, Vermont, and South Dakota joined Washington, Oregon, and Idaho with hydropower predominance.

To most people, including officially the U.S. Department of Energy, hydropower is considered renewable. Certainly the water driving its huge generators is renewable. However, some people question hydropower’s environmental tradeoffs of altering nature with massive dams.

My view is that hydropower’s downside is trivial compared with Chernobyl’s, Three Mile Island’s, or California’s now-shutdown San Onifre’s.

Geographical Outliers. Hawaii is unique in its isolation and relies on imported petroleum, figured at 62 percent in 2017. Renewables, solar, wind, and biomass, account for around 25 percent of Hawaii’s power; coal makes up 13 percent.

Hawaii has an ambitious plan to generate all of its power from local renewable sources by 2045. Solar, mostly from small-scale rooftop panels, has grown rapidly over the past five years.

In contrast to Hawaii’s rooftop approach, this large-scale solar farm is in North Carolina. Image from FarmSunEnergy1.

All in all, it’s an interesting assortment of electric generation. And it’s bound to change in the ensuing years. ds

2 comments on “THE STATE(S) OF ELECTRICAL ENERGY”