LAS POSADAS, Spanish: “the inns,” celebrates the Nativity and humble birthplace of Christ. These nine days, from December 16 through 24, traditionally involve the breaking of piñatas, papier-mâché objects containing treats. Here are some piñata tidbits, from their possibly Chinese origin to European tradition to a New World blending of Augustinian monks and Mesoamerican heritage.

Chinese Origin? Some propose that the Chinese originated a concept of seed-filled shapes of cows or oxen. These were decorated symbolically and hit with sticks until the seeds were released for a prosperous growing season. Perhaps, it’s conjectured, European traders caught on to the idea in the 14th century.

Italian Etymology. Pignatta is the Italian word for an earthenware cooking pot. Original European piñatas were clay, however those of papier-mâché were found to be less hazardous when broken.

A Local Connection. Even before Europeans introduced piñatas to the New World, there were already similar traditions in Mesoamerica. Mayans had blindfolded participants smashing symbolic objects. An Aztec tradition celebrated the winter-solstice birthday of Huitzilopochtli.

Huitzilopochtli, Aztec deity of war, sun, and human sacrifice; this, despite his name tracing to “left-handed hummingbird.” Image from Codex Borbonicus.

Aztec priests would decorate clay pots with colorful feathers. When ceremonially broken, their treasures would fall to the feet of the idol being venerated.

Canny Augustinian Monks. In 1586, Augustinian monks performed an evangelical swap similar to that of their counterparts a millennium before: They exchanged Mesoamerican winter-solstice paganism for the True Faith, this time aided by introducing the piñata and Las Posadas to the New World. 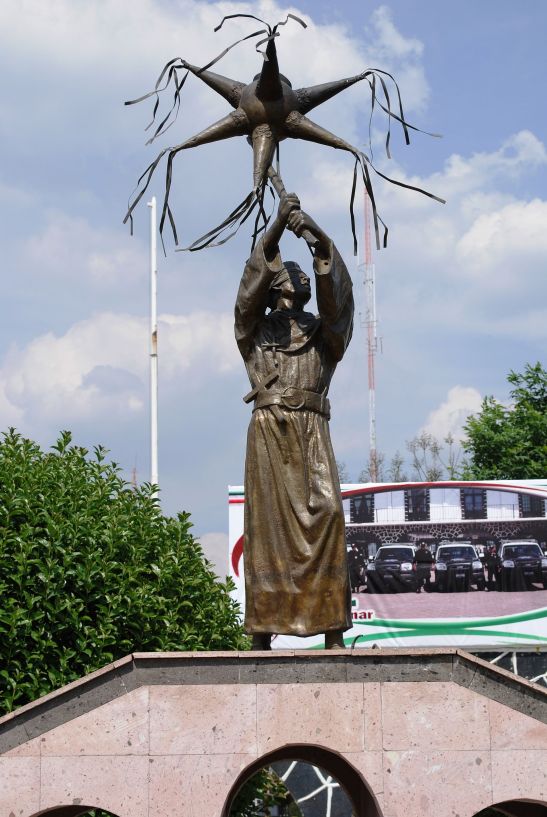 Why a Seven-Pointed Piñata? According to Wikipedia, “The Mexican Catholic interpretation of the piñata rested on the struggle of man against temptation. The seven points represent the seven deadly sins.”

“The pot,” Wikipedia continues, “represents evil and the seasonal fruit and candy inside the temptations of evil. The person with the stick is blindfolded to represent faith. The turning, singing, and shouting represent the disorientation that temptation creates. In some traditions, the participant is turned thirty-three times, one for each year of Christ’s life.”

When the piñata breaks, the treats inside are no longer evil temptations, but rather rewards of keeping the faith.

Piñatas in Our Time. In Latin American traditions today, piñatas have lost their religious significance. They’re enjoyed not only during Las Posadas, but also at birthdays and other celebrations.

Piñata shapes have lost religious symbolism as well: They’re everything from burros to Santas to Marvel Comics superheroes. In fact, federal authorities in Mexico regularly address cases of copyright infringement with piñata makers.

Other Similar Traditions. Danish kids play Slå Katten af Tønden, “Hit the Cat Out of the Barrel.” In Catalonia, there’s a Christmastime tradition of Fer Cagar el Tió. Google Translate renders this complete phrase as “To Shave the Guy,” though breaking it down yields a more literal translation, “To Make the Log Shit.” In both countries, a wooden container is filled with treats that are released after it’s broken with sticks.

I could not find any religious significance in either of these traditions. Merry Christmas anyway! Let’s all take tomorrow off. ds