A PROTOTYPE AIRPLANE with ion drive has made its first successful flights. Its EAD (electroaerodynamic) propulsion has no moving parts; rather, it depends on high voltage generating thrust via an “ionic wind.” Researchers at Massachusetts Institute of Technology have been working for seven years to make this ion-drive technology feasible in other than outer-space applications.

In this schematic, high voltage generates an ionic wind, the reaction to which is an upward thrust. Image from UAS Vision.

The MIT article “Flight of an Aeroplane with Solid-state Propulsion” appeared in Nature, 563 (2018), with a freely available abstract. “Airplane With No Moving Parts Takes Flight” by Frankie Schembri, was published in Science, November 21, 2018. Here are tidbits gleaned from these sources as well as from my usual Internet sleuthing.

Ion Drive uses a strong electric field to generate fast-moving particles called ions. These ions provide only meagre thrust, but enough to maneuver craft in the vacuum of outer space. Deep Space I and Dawn spacecraft both are powered by ion thrusters.

However, with the Earth’s gravity and air resistance, according to Wikipedia, an ion drive would theoretically take two days to accelerate a car from a standstill to highway speed.

An Earth-residing ion-drive aircraft would have to be lightweight and efficient indeed.

MIT’s EAD Craft is the first of its kind capable of lifting its own weight, in this case, about five lbs. Its 5-meter (16.4-ft.) wingspan also defines four tiers of electrodes generating its ionic wind. Each Venetian-blind element consists of positively charged stainless steel wires a few inches ahead of highly negatively charged thicker wires. Its 160-225-volt Lithium polymer battery and lightweight power converter are housed in the fuselage. 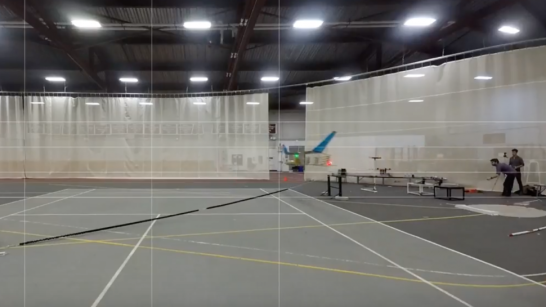 Several videos are embedded in the MIT News report.

MIT’s duPont Athletic Center proved to be the EAD craft’s counterpart to the Wright Brothers’ sand dunes of Kitty Hawk, North Carolina. Whereas the Wrights had to contend with Kitty Hawk’s weather, MIT researchers had to perform their experiments at night to fit the gym’s sports teams commitments.

The facility’s size dictated flights of no more than 60 meters/197 ft. However, it took hundreds of attempts before the EAD craft probed that distance in sustained flight. 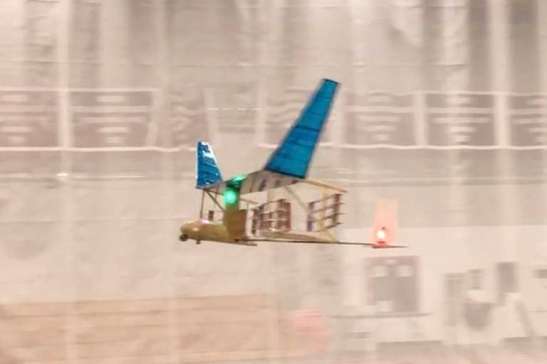 What of Ionic Wind’s Future? Ionic drive is completely silent and, of course, it does not depend on fossil fuels. Less-noisy drones are one possible near-term application. Further out, the researchers predict that ion propulsion could be combined with more conventional combustion systems to create more fuel-efficient hybrid power for large aircraft.

And it all began in the gym of MIT’s duPont Athletic Center. ds

2 comments on “A 21ST-CENTURY WRIGHT FLYER”