SOMETIMES PASSIONATE highly intelligent people are the easiest marks. Or so it seemed with 19th-century French mathematician Michel Chasles. Chasles had a passion for collecting antiquarian ephemera; fellow Frenchman Denis Vrain-Lucas provided these documents. Today, in Part 1, we discuss Chasles’ mathematical career and ardent patriotism. Tomorrow, in Part 2, we learn that Chasles was not a particularly discerning collector. Nor was Vrain-Lucas a master forger.

I learned about Michel Chasles and Denis Vrain-Lucas from one of Howard Eves’s mathematical anthologies, In Mathematical Circles

. Other clues came from my usual Internet sleuthing.

Michel Chasles, 1793–1880, French mathematician with a speciality in geometry.

Chasles the Mathematician. In 1837, Michel Chasles made a name for himself with Aperçu Historique sur l’Origine et Dévelopment des Méthodes en Géometrie. In 1841, he was appointed professor at École Polytechnique. In 1845, he advanced to a chair at the Sorbonne, Université de Paris. His reputation flourished, with several theorems bearing his name, one in geometry, another in gravitation, a third in kinematics.

Chasles was elected a Foreign Member of the American Academy of Arts and Sciences in 1864. A year later, he was awarded the Copley Medal, bestowed by Britain’s Royal Society for outstanding achievements in any branch of science.

Eves cites “an oft-repeated sentence, ‘All the geometers of Europe are disciples of M. Chasles.’ ”

All in all, a prestigious mathematical career.

Chasles the Mark. Eves continues, “But Chasles was an especially ardent French patriot, and his nationalistic pride led to a debacle. When shown some letters, purportedly written by Pascal, in which the laws of gravitational attraction were set out, he eagerly bought them; here was proof of France’s priority over Newton’s England!” 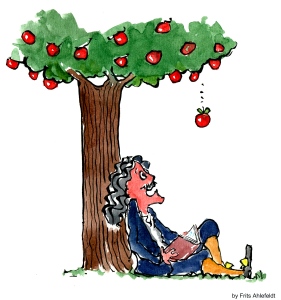 Zut alors! It was not Newton’s apple, it was Pascal’s pomme! ds