THE AUTOMOTIVE ART OF JEAN-PIERRE BOIVENT

THIS IS A tale of shoulda-bought/woulda-bought, with a happy result. The shoulda/woulda part involves not having the sense to invest in a particular book back in the 1990s. The happy result is discovery of four Jean-Pierre Boivent art prints revealed in my shelf sorting reported recently at here at SimanaitisSays. A bit of Internet sleuthing gleaned other tidbits about this artist extraordinaire.

According to the Lambiek Comiclopedia website, Jean-Pierre Boivent, French-born 1937, has specialized in drawings about motor sports. During the 1950s and 1960s, he worked for French comic books.

Beginning in 1961, Boivent wrote and illustrated articles about race cars for Pilote magazine. He left the field of comics during the 1970s, but continues his motor sports interest.

For one reason or another at the time (possibly its fully justified $1700-$2100 price), I neglected to add this book to my collection. On the other hand, correspondence with Jean-Pierre Boivent resulted in his kindly sharing four art prints from the book. A favorite, partly because of my knowing the principals involved, is Boivent’s Monaco 1961.

Monaco 1961 had an epic battle between Stirling Moss’s Rob Walker Lotus 18 and Richie Ginther’s more powerful Ferrari 156. Moss proved victorious on the particularly warm May 14 by removing the side panels to keep cool in his near-obsolete Lotus 18.

Both the Maserati 250 F and Vanwall have already appeared here at SimanaitisSays. At Monaco 1956, Moss and his Maserati finished first after having gridded second to Juan Manuel Fangio’s Ferrari. Trintignant’s Vanwall gridded sixth of 14 starters and dropped out with overheating. Car sharing was allowed in those days, and Fangio finished fourth, having taken over Eugenio Castellotti’s Ferrari; Fangio’s first mount finished second with Peter Collins at the wheel. 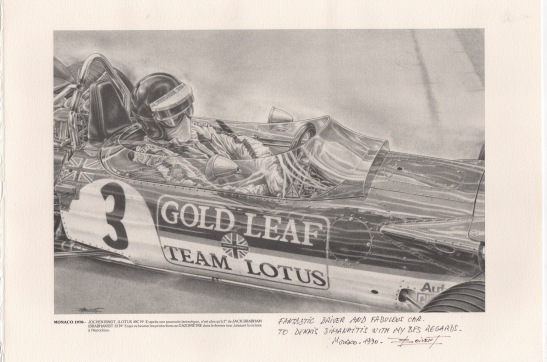 Jochen Rindt gave the highly successful Lotus 49 its final victory in the 1970 Monaco Grand Prix. He also posted fastest lap in his Gold Leaf car. This was only the second year in Formula 1 where cars carried sponsor logos. Hitherto, national livery had been sans advertising: green for Britain, red for Italy, silver for Germany.

It rained heavily at Monaco 1972. Jean-Pierre Beltoise mastered conditions and scored his sole Grand Prix victory in what was to be the last win for BRM.

Concentrating on these and other prints for the book, Boivent immersed himself in a year’s research and documentation. Then, as noted in the Author’s Note, “Each one of the drawings required a minimum of one month’s work, not only because of the accuracy and authenticity sought, but also because of the material used for the drawings, black lead.”

“When it is sharpened to a needle point,” the note continues, “it allows the artist to create half-tints, body reflections in the plexiglass of the cockpit, decors, tarmac, etc., by means of hundreds of tiny inter-crossed strokes which must not be visible…. This leaves no room for error as it cannot be erased.”

What artistry! And many thanks, Jean-Pierre. ds