FOR ONE REASON or another, the idea of a Mueller bunco squad came to mind. And this got me thinking about the etymology of the word “bunco.” I found some unexpected things, indeed, sufficiently many to have Parts 1 and 2, today and tomorrow.

Thus, editorial writers, anonymous or otherwise, should have no problems with verbiage.

Merriam-Webster says bunco’s first known use in English was in 1872, relatively recent as words go. It hedges a bit on the word’s etymology: “perhaps alteration of Spanish banca, bench, banking, bank in gambling, from Italian.”

Early money changers transacted their business on bancas, benches. In time, the money-changer’s shop became known as a banca, and our English bank. 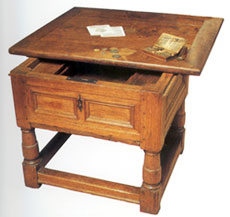 Above, a money-changer’s bench in Belgium. Below, The Banker and his Wife, after Quinten Metsys, Royal Museums of Fine Arts of Belgium. Images from the Museum of the National Bank of Belgium.

It’s a bit distressing that banks and bunco have been closely related for so long.

Wikipedia offers more details: “Bunco was originally a confidence game similar to three card monte. It originated in 19th-century England where it was known as ‘eight dice cloth.’ It was imported to San Francisco as a gambling activity in 1855, where it gave its name to gambling parlors, or ‘Bunco parlors,’ and more generally to any swindle.”

Today, there’s a World Bunco Association that claims a resurgence in the the traditional game of Bunco in the 21st century. In 2006, it claimed, “over 59 million women have played Bunco and over 27 million play regularly.”

Women only? Indeed, the Washington Post ran an article on February 4, 2007, “Suburban Moms Forge Bonds Over Bunco,” by Michael Alison Chandler. He notes that it’s “sometimes referred to as the ‘housewife’s drinking game.’ ”

As though women never needed a reason to drink.

Tomorrow, we consult other bunco sources, ranging from the Compact Edition of the Oxford Dictionary of the English Language to the Dictionary of American Underworld Lingo. Both seem not inappropriate these days. ds