THE MUSIC of Johann Sebastian Bach has delighted me ever since I realized that music was more than patty-cake. I’m not a musician of any sort. But a far-sighted Cleveland Public School system took kids on regular Severance Hall trips to hear the Cleveland Orchestra, led at the time by maestro George Szell. Also, the downtown branch of the Cleveland Public Library had an extensive collection of recordings to lend, in those days 12-in. LPs and still some 10-in. 78s.

Soon, I had favs, and my parents rewarded me with a modest allowance to buy records. One of my first purchases was the 1955 recording of pianist Glenn Gould playing Bach’s Goldberg Variations.

Back then, LPs were thick vinyl and the Goldberg Variations, 30 of them and an aria, took up both sides of the record. The album’s intrinsic value was enhanced by its being double-sleeved: The outer one showed 30 photo clips taken during Gould’s studio performance; the inner one had extensive notes on the variations written by Gould. It also had a fetching sketch of a fellow and his lady friend enjoying Bach and evidently each other.

This latter-day release is housed in a gatefold format. Image from Analog Spark.

Here in Part 1 are tidbits about Bach, Von Keyserling and Goldberg. Pianist Glenn Gould makes his appearance in tomorrow’s Part 2.

Johann Sebastian Bach, 1685–1750, German composer of the Baroque period, one of the greatest composers of all time. Portrait by E.G. Haussmann, 1748.

Johann Sebastian Bach, like composers before his time and since, lived on commissions from wealthy patrons and court appointments. These latter were not without difficulties: Bach was once imprisoned for disobedience over one such squabble.

His commissions included monthly cantatas composed while employed by the Duke of Weimar, 1714; the Brandenburg Concertos, first performed in 1721 for Christian Ludwig, Margrave of Brandenburg-Schwedt; and the Goldberg Variations, composed for Count Keyserling in 1741.

Count Hermann Karl von Keyserling had been appointed president of the Saint Petersburg Academy of Sciences. However, in retrospect, his place in history seems owed to his insomnia. So the story goes, Bach composed the Goldberg Variations as a sleeping aid for von Keyserling.

Johann Gottlieb Goldberg, age 14 at the time, worked for Count Keyserling. One of Goldberg’s duties as chamber harpsichordist was to deliver nightly repose, sort of Eine Kleine Nachtmusik Ambien. 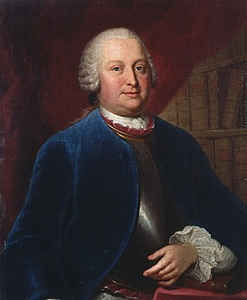 Goldberg had a modest career of his own as a composer in the late Baroque and early Classical periods. Among his works are cantatas, trio sonatas, 24 polonaises, harpsichord concertos, and, alas, a set of lost chorale preludes.

This charming tale of the Goldberg Variations was first recounted in 1802, more than 60 years after their composition, by Bach biographer Johann Nikolaus Forkel: “Thereafter the count always called them his variations. He never tired of them, and for a long time sleepless nights meant: ‘Dear Goldberg, do play me one of my variations.’ ”

Veracity of the tale has been questioned from time to time, but my view is Nicht wahr, aber gut gemacht, a German rendering of that old Italian se non e vero, ma ben travata, loosely, “It may not be true, but it’s a good story.”

Tomorrow in Part 2, we’ll continue with other good stories concerning Glenn Gould and his artistry with the Goldberg Variations. ds