The Office of Price Administration’s ration stickers and books were in use for the war’s duration. Rationing ended on August 15, 1945, the day Japanese surrender was announced.

Lum and Abner Helped. Radio broadcasts of the war era did more than simply entertain and inform: They also promoted government rationing programs and helped maintain morale. Lum and Abner, a gentle comedy radio show created by Chester Lauck and Norris Goff, was part of this effort. 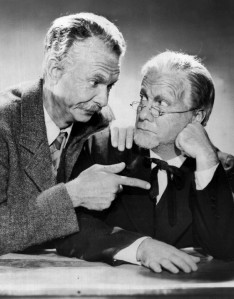 The pair, both Arkansas-born, constituted almost the entire repertory company portraying residents of Pine Ridge, Arkansas. Lauck was Columbus “Lum” Edwards, as well as Grandpappy Spears and Cedric Weehunt. Goff portrayed Abner Peabody, as well as Squire Skimp (often the conniving baddy), Mousey Grey, and other characters. Only a few other radio artists had occasional roles.

Lum and Abner operated the Pine Ridge Jot ‘Em Down Store and Library, serving as a central meeting place. The gasoline rationing episode was broadcast in November 1942 in anticipation of its official beginning on December 1 of that year. 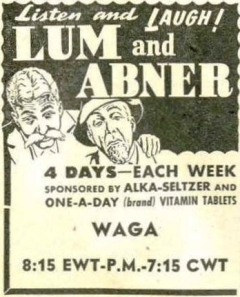 “What if a feller needs more?” asks Abner.

“There are other books,” Lum says, “but the best way is to get together with neighbors…. The point is ‘Share your car and go twice as far.’ ” 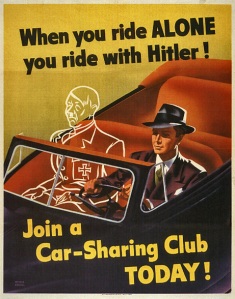 Cedric Weehunt proudly shows off his gasoline ration book and says, “Well, I better be going now. I’ll send you a postcard from the city.” 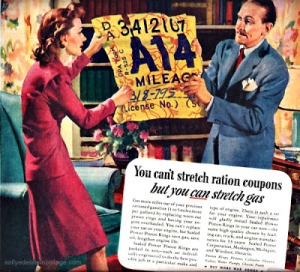 Why is Cedric going to the city?

He’s striving to be patriotic. “The government give me this gas book to use,” Cedric says, “and I know that I’ll never be able to use four gallons of gas a week in a little place like Pine Ridge.” ds