THE IDEA of a European vacation in 1909 was different from one today. There was no jet lag. No carefully sized carryons. But it did call for suitable planning. 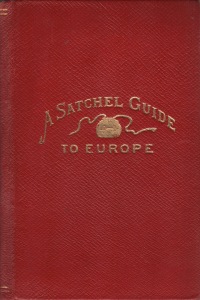 A Satchel Guide for the Vacation Tourist in Europe,

My edition of Rolfe’s Satchel Guide was published in 1909, and thus contains information for vacationers of that particular era. Tidbits follow.

When Vacation Meant Vacation. As Rolfe explains, “It is a guide ‘for the vacation tourist,’ who can spend but three or four months abroad, not a general guide to all Europe for those who take a year or more for the tour.”

On Walking Tours. Rolfe advises, “We have had in mind also the wants of the pedestrian, and have told him where it will pay him well to walk, and where he cannot afford to do it. This is a new feature in an American guide-book, and it has been carefully worked up. The author has tried most of the ‘tramps’ that he recommends—as well as some that he advises the reader not to attempt.”

Note, this advice comes from the guide’s Preface to First Edition, 1872. On the other hand, I could find no mention of personal “motors” as a means of conveyance in my 1909 edition. This was only one year after introduction of a car destined to change matters considerably, the Ford Model T.

On Seasickness. Rolfe gives lots of advice for crossing the Atlantic: “Life on shipboard has its peculiarities, but after all it is much like life everywhere else. If you must be seasick, do not weakly succumb to it, but fight manfully against it. Keep on deck as much as possible and it will go far to mitigate the attack.”

Rolfe’s choice of the word “manfully” is mitigated throughout the guide by concessions to the gentle sex: “We have not the masculine presumption to dictate to the ladies what they should take to wear at sea or on shore, but social etiquette and usage are essentially the same for both sexes. For a comfortable feminine outfit, a lady friend who had made many trips to Europe has kindly furnished us with the following suggestions.”

On M’Lady’s Dress. The guide follows with two pages of the lady friend’s hints, including “Two walking gowns are the basis of every woman’s European wardrobe… Shirt waists of cotton, flannel, and silk are as useful as at home.”

The lady friend continues, “Besides the walking gowns and the ‘blouses,’ a woman needs at least one gown for evening wear. This should be chosen to bear packing well. A taffeta silk which comes out of a bag a mass of wrinkles is a trial to the owner.”

“English people wear woolen underwear the year around,” she advises, “and the damp climate, like the ocean, demands it…. The ‘pelerine’ [a woman’s cape popular in the 19th century] used in the Tyrol is a very sensible protection against rain, and can be used as a pillow, a blanket, or a ‘hold-all,’ according to the ingenuity of the traveller. A bright-colored knit jacket is an excellent travelling companion.”

I’d conjecture this lady friend would be an excellent travelling companion as well.

We could economize on telegraph costs by using one of several books of travelers’ code. I have Blair & Co’s. Rolfe recommends The Adams Cable Codex.

Transatlantic Travel. Steamship voyages between the New and Old Worlds were seven-day affairs in those days. Rolfe notes, “The leading lines from New York to Liverpool are the Cunard and the White Star.” Other steamship companies included among Old World ports the cities of Antwerp, Bremen, Cherbourg, Copenhagen, Christiana, Harve, Hamburg, Rotterdam, and Southhampton.

“Even on the best of ships,” Rolfe advises, “there is quite a choice in state-rooms, in respect both to size and to situation. As a rule, those nearest the middle of the ship are to be preferred.”

In a few years, European travel was to become complex indeed. ds