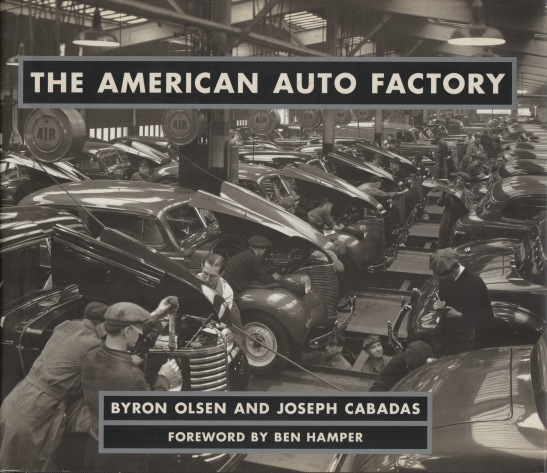 From the Craft Method to Birth of Giants. The Duryea Motor Wagon Company, Springfield, Massachusetts, built 13 cars in 1896. Karl Benz had been selling his Patent Motorwagen in Germany since 1885; his wife Bertha’s automotive adventure cited here at SimanaitisSays.

These and other early automobiles were fabricated in the small tool shop tradition of artisans making and assembling components by hand.

Components, large and small, undergo scrutiny at the Overland plant’s Inspection Department Number 1. Note the ties worn by many of these specialists. This and the following images from The American Auto Factory..

A factory in the early 1900s would have depended on power from a central steam engine or electric motor. Traditional waterwheels were not unknown. 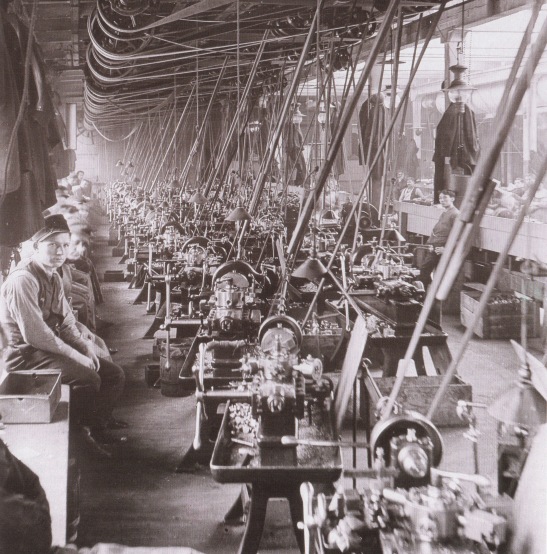 Cadillac engine fabrication in 1902. Its machine tools were run via overhead belts and shafts driven by central steam power. Note the Möbius twist in some of the belts.

Standardization of parts evolved from New England’s small-arms manufacturing. However it was big news in 1908 when Cadillac earned a Dewar Trophy for demonstrating disassembly, intermixing of parts, and successful reassembly of three of its Model Ks. 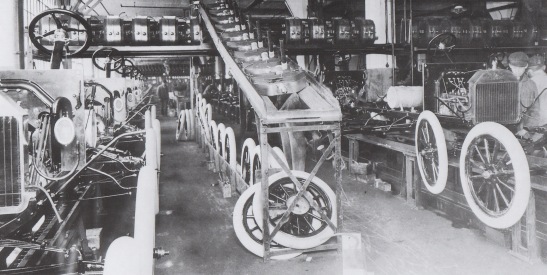 In its 1914 assembly line, chain-driven conveyors brought Ford Model T chassis to their components. Here, wheels and radiators slide down chutes for delivery and assembly.

The idea of bringing the work to the worker made sense in other manufacturing as well. 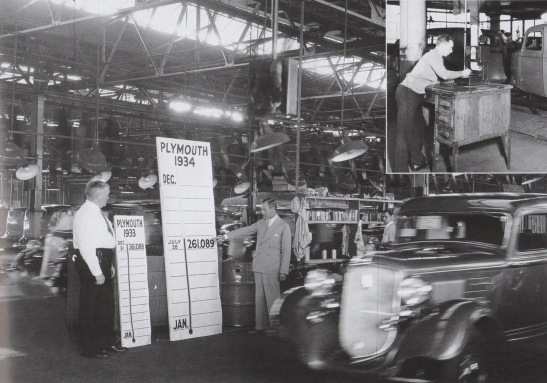 This and other societal aspects (see Middletown) gave rise to unions in the auto industry, a practice not welcomed by all.

The Battle of the Overpass, May 26, 1937: Ford “Service Department” goons attack labor organizers, among them Walter Reuther, at the company’s River Rouge facility.

World War II dissolved any traces of the Great Depression. The auto industry played a key roll in converting assembly lines designed for civilian products into those required for war. 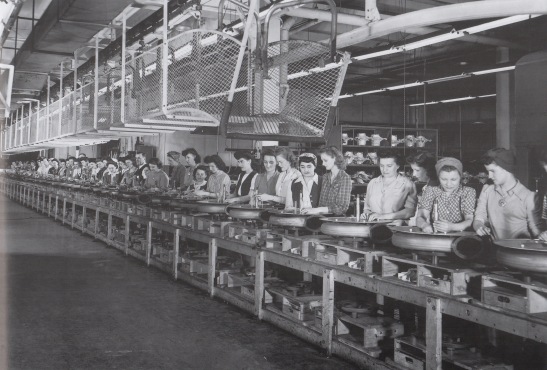 Women assemble aircraft superchargers of the centrifugal type on an extended workbench at a Ford facility. Image from October 19, 1944.

Post-war Abundance, Opulence, and Consolidation. A post-war boom evolved from automobile abundance to one of automotive opulence. Many traditional marques, among them Packard and Studebaker, disappeared. Others, like Hudson and Nash, consolidated. In time, the remaining domestic automakers felt the impact of imports.

Kaiser and Frazer bodies were built at its Willow Run, Michigan, plant. GM would later buy the facility for producing its Hydra-Matic transmissions.

A completely automated welding line fabricates Fords in the 1990s. There’s not a worker nearby.

Today’s international auto industry is a far cry from a few guys working to fit hand-made bits into something that ran. The American Auto Factory is a fine book detailing this evolution. ds