THE TRAGEDY/SUCCESS OF THE COMMONS

WHAT FOLLOWS is a brief account of a philosophical concept in the social sciences. My account is brief for two reasons: I haven’t the space here nor the depth of knowledge to pursue it more deeply. Nonetheless, what’s traditionally called The Tragedy of the Commons is fascinating, relevant today—and, in many ways, it needn’t be tragical.

Science magazine, published weekly by the American Association for the Advancement of Science. Cover image from June 29, 2018.

Science, June 29, 2018, addresses “Tomorrow’s Earth,” a heady topic indeed, in citing the 50th anniversary of its publishing “The Tragedy of the Commons” essay by American ecologist and philosopher Garrett Hardin. The concept itself dates back to 1833 and British economist William Forster Lloyd.

Over the years, the concept has not been without controversy in being highjacked by one political faction or the other.

The Tragedy of the Commons involves the British practice of setting aside unregulated land for communal use. For example, today’s Boston Common was originally land available to farmers for grazing cattle.

Its tragedy, some economists claim, lies in the concept being unsustainable: Individuals acting in their own self-interest will behave contrary to the common good. Overexploitation of the jointly owned resource would seem inevitable.

The Grand Banks. Image by Treeman.

Overfishing the Grand Banks is an example. For centuries, this area off Newfoundland, Canada, attracted fishermen to a seemingly endless supply of Atlantic cod. However, advances in fishing technology in the 1960s and 1970s led to overfishing and an unsustainable cod population.

In 1992, the Canadian Federal Department of Fisheries and Oceans declared what was envisioned as a two-year moratorium on Atlantic cod fishery. Alas, it was too late, the cod population has not rebounded, the moratorium continues, and the industry is largely gone.

Other examples of the Tragedy of the Commons include air pollution and water mismanagement. Our atmosphere and water are commonly held resources. Yet each is subject to exploitation by particular industries or individuals not acting in the commonweal.

Possible solutions exist, both in collective restraint as well as in governmental actions. Political scientist Elinor Ostrom was awarded the 2009 Nobel Prize in Economic Sciences for her analysis in suggesting the outcome need not be tragic. 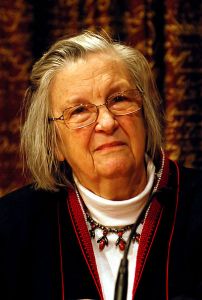 As an example, Wikipedia cites that “a commons in the Swiss Alps has been run by a collective of farmers there to their mutual and individual benefit since 1517, in spite of the farmers also having access to their own farmland.”

Governmental reactions to individual exploitation of common resources include privatization, regulation, and a middle-ground modification known in economics as “internalizing externalities.” An example of this last one is gasoline taxes intended to include both the costs of infrastructure maintenance and also of air pollution (the externality in this case).

“One example,” Rose offered, “was the customary right claimed by some communities to hold periodic dances, a custom held good over a landowner’s objections.… In a sense, this is the reverse of the ‘tragedy of the commons.’ It is a ‘comedy of the commons,’ as is so felicitously expressed in the phrase, ‘the more the merrier.’ ”

Rose concluded her University of Chicago Law Review article with, “In the absence of the socializing activities that take place on ‘inherently public property,’ the public is a shapeless mob, whose members neither trade nor converse nor play, but only fight, in a setting where life is, in Hobbes’ all too famous phrase, solitary, poor, nasty, brutish, and short.”

The Success of the Commons has examples galore. Our information age collectively generates what might well be called a Knowledge Commons.

True, part of the Internet is spam that adds cost to all while benefiting only a few hypothetical Nigerian princes or faux friends caught short of cash in foreign places.

On the other hand, review websites give consumers information gained collectively for the benefit of all. Informational databases such as Wikipedia and just about any website ending in .edu are other examples. Open-source software such as Linux and even my own hobby of using GMax for adding aircraft and scenery to Microsoft Flight Simulator are also Successes of the Commons. ds