THERE WAS a time several years back when my grandson Carter was interested in magic. My singular influence in this activity was teaching him how to palm the pea in the shell game. He got quite accomplished at this, considering his tender age; I don’t need to know how much lunch money he won from friends.

In any case, he has given up magic in favor of Lego construction, and I now encourage him to perform two-second tire changes with his LEGO Speed Champions McLaren Mercedes Pit Stop

However, returning to an earlier form of magic, I recently uncovered a Taschen collection of 100 postcards in its Magic Postcard Set

. One of the postcards extolls the wonders of Carter the Great, which sounded like a neat gift for my grandson until I read its fine print: “Do the Dead Materialize? The Absorbing Question of All Time.”

Carter the Great, 1926. This and the following images from Magic 100 Post Cards, by Taschen.

Charles Joseph Carter, 1874–1936, was an American stage magician whose first careers were in journalism and the law. There’s a moral here, but….

According to Wikipedia, Carter’s Seacliff District, San Francisco, home was rented in the 1980s and 1990s by the Sumitomo Bank of California for its president’s residence. It is now a foreign consulate.

Cirque Ancillotti’s Scientific Enigma of the Living Head Without a Body, c. 1920.

Lucie Plége sort of inherited her late father’s circus in 1908 when she married its bicycle acrobat Ugo Ancillotti. (And wouldn’t that make a great first line for a novel?)

Wouldn’t you know, there’s a SimanaitisSays family connection with this one too: Daughter Suz is a fan of Mystery Science Theater 3000 and attended their ConventioCon ExpoFest-A-Rama in 1994 as “Jan in the Pan.” Jan is from MST3K episode 513, her severed head wrapped in gauze, tubes, and surgical tape and placed in a pan. Suz wore a neck-high turkey roaster. 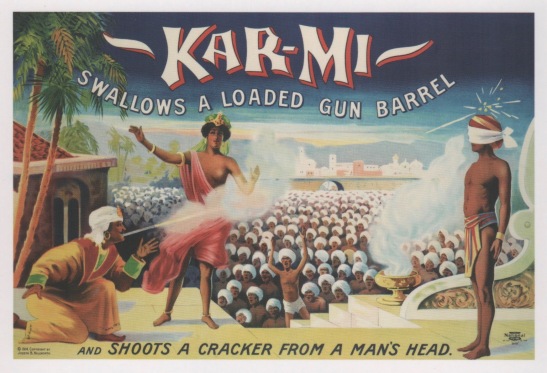 According to magictricks.com, Joseph Hollingsworth, 1872–1956, was “one of the hardest-working acts in vaudeville in the early years of the 20th century.”

A lesson to us all: He began his career as Joseph Hallworth, then changed this to Joe van Victorina, then just Victorina, then Prince Kar-Mi, and finally, Kar-Mi. He was known to paste new monikers over old ones on his stock of posters.

Kar-Mi was a sword-swallower and, as shown above, a sharp-shooter. As a sideline, between shows he set up a temporary tattoo parlor.

Dante was a Russian magician known for “Technique to the point of Fantastique,” or so it claimed on another of his posters described at Collectors Weekly. It’s indicative of USSR marketing at the time that the only English words in this other poster are “30 GIRLS.”

Whatever Dante’s fantastic technique, he was no dolt marketing-wise.

I have no information on this particular Viennese magician. But you’ve got to admire his eclectic schtick. ds