ANDREW LLOYD WEBBER’S autobiography Unmasked is an absolute delight. I’m only partway through, charmed by his stories, and already looking up stuff he mentions to learn more.

In a way, this is the highest praise one can say for a book: It encourages added reading. 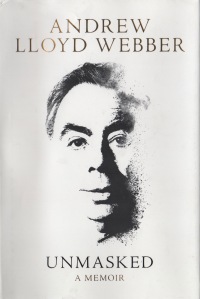 Toy Theatre and St Elvis. Lloyd Webber [this is how the family name is rendered throughout the book] describes “the three great passions that were to shape my life: art, musical theater, and architecture.” As a kid, he combined all three in assembling Harrington Pavilion, named for his family’s New Kensington address. Unlike mine, his toy theater eventually even had a revolving stage, thanks to “an old gramophone turntable.”

Andrew and his younger brother Julian (destined to be a virtuoso cellist and conductor) entertained the family with their mini-takes on popular theatre of the era. Andrew recalls that he also “built a vast play-brick Gothic cathedral (dedicated to St Elvis) at the other end of the nursery to cope with the Harrington Pavilion theatregoers’ spiritual needs.”

On Early Schooling, Athletics, and Architecture. About Westminister School, Andrew recalls how a gym master’s sadistic antics “drillled into me a loathing of exercise and sport that was only partially sorted out by a Californian swimming instructress called Mimosa in the 1970s.”

With his maturing tastes, and possibly a touch of teenage rebellion, Lloyd Webber developed a love of Victorian architecture, a genre not generally held in high esteem by with-it Brits in the mid-20th century: “Most of the finest Victorian churches were built as mission bases from which to scupper Satan’s enticements to the defenceless poor. So I got into some near misses with local youth who did not take kindly to an effeminate boy in a smart school suit clutching poncy architectural guidebooks. As a result of this I discovered I wasn’t totally unathletic. I could run.”

Indeed, this appreciation of Victorian architecture played a role in Lloyd Webber’s Oxford education to come. In describing his “sitting” the entrance exam, he writes, “I waffled on about how Edward II was a far better king than Edward I …[and] that Keble College, for years wrongly considered a red brick Victorian eyesore, is in the top three of Oxford’s best buildings….”

“At least I had given it my best shot,” he says. An interview followed (at which a Siamese cat took a liking to him) and Lloyd Webber got a scholarship to Magdalen College, Oxford. 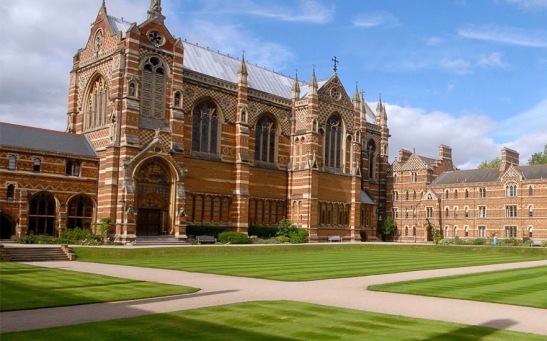 Keble College, established in 1870, is a relative newcomer at University of Oxford, the latter established c. 1096. Image from keble.ox.ac.uk.

Rather than stone or wood, architect William Butterfield, 1814–1900, employed brick, what The Principles of Architecture: Style, Structure and Design,

edited by Michael Foster, 1989, called “the first building material to be made by man.”

Keble’s red and white brick is highly decorative in what has come to be known as constructional polychromy. The college’s magazine, published each term, is called The Brick. Its students publish The Breezeblock, containing college gossip and satire of Keble goings-on. 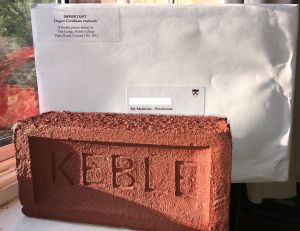 And at commencement, each Keble grad is presented a commemorative brick accompanying a degree certificate.

What a neat bit of college memorabilia. ds