TESLA MODEL S sedans and Model X SUVs are no big surprise here in the Southern California vehicle mix. Come to think of it, nor are Ferraris, Maseratis, and the occasional Lamborghini. Thus far, however, I haven’t seen a Model 3. This one is Tesla’s crucially important mass-market BEV (battery electric vehicle), base-priced at $36,000, as contrasted with the Model S’s $68,000 and Model X’s $79,500. Apparently there are a few Model 3s on our roads, but not very many.

Nevertheless, there’s been plenty of ink on the Model 3. Here’s are tidbits gleaned from Car and Driver, SAE Automotive Engineering, Motor Trend, and Automotive News.

The article’s subhead reads “The perils of outsize expectation.” The car’s Highs were “Satisfying handling, impressive tech integration, looks and feels like the future.” Its perceived Lows: “Not the price we were promised, not the range we were hoping for, the questionable build quality we’ve learned to expect.” 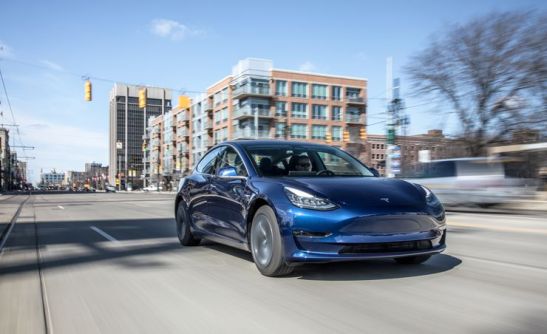 The car’s as-tested price was $56,000, with a base price of $45,000 for the Long Range version. Tesla claims the $9000 Long Range battery pack extends driving range from 220 miles to 310. C/D reported a highway range of 200 miles, albeit in relatively cold 28-degree Fahrenheit conditions.

In comparing the car to similarly priced German competitors, C/D wrote, “… while we did not observe any glaring fit-and-finish issues inside the Model 3, the exterior was a different story. Inconsistent panel gaps around the doors and myriad ill-fitting trim pieces were among the worst we’ve seen in recent memory.”

As evidence, Lindsay cited a report by Munro & Associates, which he calls “one of the industry’s most respected competitive-teardown-and-analysis firms.”

An interesting aspect of the auto business: Everyone buys competitor’s cars, or hires outfits like Munro & Associates, to strip them down and assess their pluses and minuses. Part of this reverse engineering is “What’s the material and how does it compare with ours?” Other questions asked are “How do they perform this particular operation? Is it more efficient than ours?”

Lindsay was invited to Munro where “There, on tables and hanging on pegboards, were the guts of the first “affordable” Tesla automobile, organized into major systems—body in white [the unibody prior to attaching other bits], HVAC [heat/ventilation/air conditioning], power electronics, chassis and steering, interior, battery system…. Even the potting compound and industrial adhesive that are spread like peanut butter throughout the battery pack to connect components and protect them from vibration were scrutinized.”

Lindsay asked Sandy Munro to rate the car’s components on a scale of 1 to 5, the latter being state of the art. Munro said, “This really is two very different cars. Its body is a 1—everything above the floor pan is really puzzling. Let’s just say it’s an ‘unusual’ way to put a car together. Body fit-and-finish and DFM (design for manufacturability) are poor.”

“But,” Munro continued, “Tesla’s electronics rate a 6 on a scale of 5. We were shocked by the sophisticated integration and manufacturing techniques in the battery system and related electronics.… Clearly there is innovation here.”

Lindsay cited particulars: “While its electronic systems may be SpaceX-advanced, in the eyes of Munro, the Model 3’s BIW [body in white] reflects a decidedly lower state of the art. A walkaround revealed a bewildering hodgepodge of fastener solutions, weld techniques, and ‘unusual choices’ in the steel-intensive (to minimize cost) body.”

Yet, noted Lindsay, the “Model 3’s cabin abounds with smart solutions. Its cross-car beam consists of a hydroformed aluminum tube with overmolded-plastic mounts and hangers. The assembly weighs 3.3 kg (7.2 lb)—lighter than could be done in magnesium.”

By the way, Tesla responded to the Munro & Associates report saying the two particular Model 3s analyzed were early ones. The company claims it has improved its production process and continues to do so.

The Motor Trend website cited this rebuttal and provided its own assessment in “Tesla Model 3 Teardown: Deconstructed 3,” April 25, 2018.

The Motor Trend assessment corroborates Lindsay Brooke’s article with several added pluses of design innovation. However, Motor Trend concluded with “It might be time for Tesla to raid mainstream automakers’ senior mechanical and manufacturing engineering ranks.”

Automotive News, the authoritative weekly for the industry, has Tesla coverage of one sort or another in every issue.

In its “the final say…” section, April 2, 2018, Automotive News cited John Thompson, CEO of Vilas Capital Management, in a note to investors.

“As a reality check,” Thompson was quoted, “Tesla is worth twice as much as Ford, yet Ford made 6 million cars last year at a $7.6 billion profit, while Tesla made 100,000 cars at a $2 billion loss. Further, Ford has $12 billion in cash held for ‘a rainy day’ while Tesla will likely run out of money in the next 3 months. I’ve never seen anything so absurd in my career.”

Among automakers, the list puts Toyota top, Ford fourth, and Tesla eighth. About Tesla’s ranking, Peter Walshe, Global BrandZ director, said, “People are excited about Tesla because it is not just a car brand, it’s a Mars explorer brand. This is tremendously attractive to consumers. Tesla stands for great promise, but it is going to have to deliver on this promise.”

By my reckoning, SpaceX is delivering. But Tesla Model 3? ds