I DIDN’T realize it at the time, but back in junior-high study hall I was sketching the Squire. And, indeed, in England back in 1926, 16-year-old Adrian Morgan Squire was also sketching what came to be his sports car.

A sketch of his car, by Adrian Squire. This and the following images from Classic Cars in Profile: Volume 3: Profile Nos. 49-72,

Jonathan Wood’s most informative article, “The 1 1/2-Litre Squire,” details one of 24 cars described in Classic Cars in Profile, Vol. 3, from which these tidbits are gleaned.

Squire’s initial sketches even led to a six-page catalog describing his envisioned sports car: “No attempt has been missed to make the Squire car an owner-driver’s ideal,” the catalog read. “For comfort, speed, and safety, buy a Squire.”

Schooling came first, though, with a brief stint as an electrical engineering student at Faraday House, London. “His restlessness got the best of him,” Jonathan Wood notes, “and he gave up his studies to become an apprentice with Bentley Motors.” In 1929, Squire moved on to the M.G. Car Company.

This lasted two years, until, at age 21, Adrian established Squire Motors Ltd., a petrol station/garage in Remenham Hill, a mile outside Henley-on-Thames. Co-directors of the firm were “Jock” Manby-Colegrave, then 20, and Reginald Slay, nicknamed “Uncle.” Slay was 26.

“A Squire Deal is a Square Deal,” the firm’s advertising read.

By 1933, Squire Motors started designing a prototype car. In January 1934, things were made official with formation of the Squire Car Manufacturing Company. 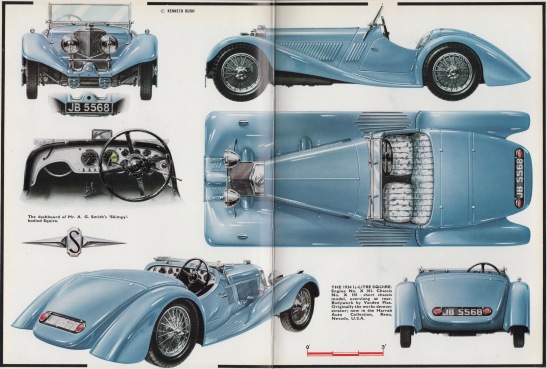 The first Squire. In 1967, it was on display at the Harrah Auto Collection. Today it resides in the Simeone Foundation Automotive Museum, Philadelphia, Pennsylvania.]

The car’s engine came from British Anzani, with a Squire motif replacing the original’s. The Anzani designer said, “He can call it what he liked so long as he paid.” 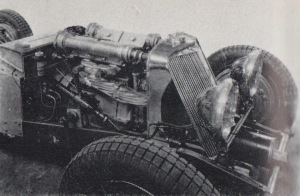 Quite an advanced engine for its time: double overhead camshafts, supercharged, producing 110 hp from a mere 1 1/2 liters.

The Squire née Anzani powerplant was a 1496-cc four-cylinder, typical of the era with 69-mm bore and a lengthy stroke of 100 mm. It had twin overhead camshafts and, with a David Brown Roots-type supercharger, produced 110 hp at 5000 rpm. (David Brown, by the way, is the D.B. of Aston Martin fame.) A 4-speed Wilson pre-selector gearbox was fitted. 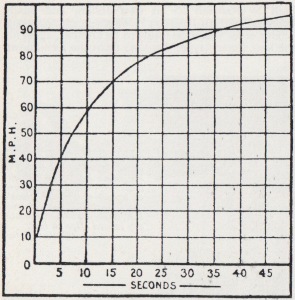 The chassis was traditional, with semi-elliptic springs for its beam front and live rear axle. Its Lockheed hydraulic brakes and oversize drums were so potent that their retardation force was known to fracture the front-spring shackles.

Bodywork initially came from famed English coachwork supplier Vanden Plas. Two chassis lengths were offered, with wheelbases of 102.0 in. and 123.0 in. Notes Wood, “With the short-chassis version selling at £1220 with a two-seater Vanden Plas body and with the long four-seater another £25, the Squire was one of the most expensive British sports cars of its day.” Indeed, this was Bugatti territory, and Bugatti was already a legendary marque in 1934. 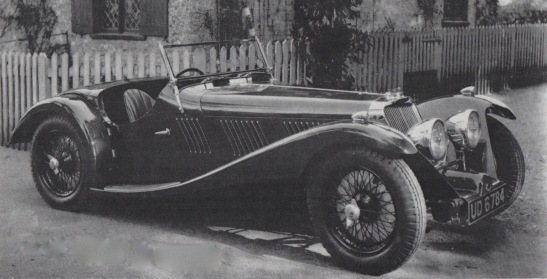 Squire sales were not brisk: a 1933 prototype and only four in all of 1935. In fact, in September 1935, the firm offered a short-chassis version with less pricey Markham bodywork. These were privately known around the works as the Skimpies, and saved prospective buyers £200 of Vanden Plas reputation. Ranalah coachwork was another choice.

Val Zethrin, owner of the last 1935 car, bought up the remaining bits and hired two Squire mechanics. Perhaps three “Zethrin-era” Squires brought the nameplate total to no more than 10.

Adrian Squire went to work for W.O Bentley again, this time with Lagonda, a Brit automaker founded in 1906. W.O. headed design there after Rolls-Royce had bought his company in 1931 and subsequently screwed him over (another tale for another day). Squire moved on to Bristol Aeroplane Company. He died in 1940, age 30, in a Nazi air raid of Bristol.

Jonathan Wood concludes, “… his courage and single-mindedness will always be remembered long after his naïvety as a businessman is forgotten.”

And plenty of us remember the car from study hall. ds