THERE ARE times when I delight in celebrating multifold aspects of science. Here are three examples appearing in Science magazine, published weekly by the American Association for the Advancement of Science.

The items are varied indeed: saildrones, a book review on the power of networking, and a heartening change in kids’ perception of scientists.

Saildrones are being tested in the Pacific Ocean as innovative means of monitoring El Niño and his sister La Niña. A marine research startup, Saildrone, of Alameda, California, devised these semiautonomous seven-meter (23-ft.) sailing drones in collaboration with the U.S. National Oceanic and Atmospheric Administration. 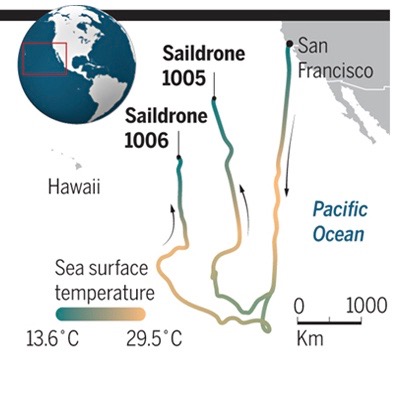 Saildrones 1005 and 1006, both out of San Francisco, have been recording ocean temperatures and other data for seven months now. This and the following image from Science, March 9, 2018.

The drones monitor ocean temperature, wind, and solar conditions, data that hitherto have been collected by ships; satellites; and a grid of buoys, the Tropical Atmospheric Ocean array. Each of these methods has tradeoffs.

For example, the buoyed TAO array has a tendency to accumulate marine growth attracting fish and thus fishing boats. In fact, the TAO grid appeared on maps of global fishing catches. This interaction led to damaged buoys, and maintenance work piled up. By contrast, a slowly moving saildrone is propelled by the wind, with solar panels providing power for instrumentation and satellite communications. 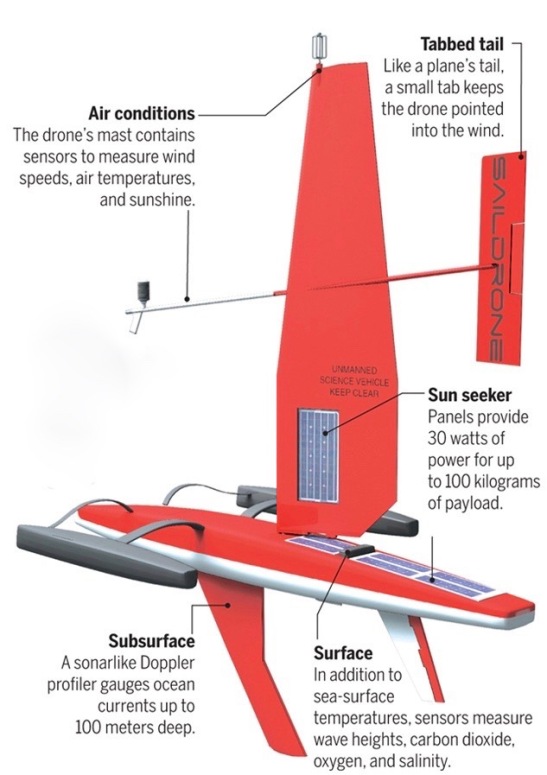 “Saildrone Fleet Could Help Replace Aging Buoys” by Paul Voosen, Science, March 9, 2018, reports “In addition to temperature, wind, and solar radiation data, the Pacific saildrones are measuring how the ocean and air exchange gases like carbon dioxide and oxygen, and they are using Doppler instruments to gauge currents coursing up to 100 meters below the surface.”

Arrays like the TAO continue to be important, but sailplanes are seen as “a cheaper, more resilient oceanographic backbone.”

A Network View of History is offered in the book review “Who Holds the Power?” by Sean P. Cormelius, in this same issue of Science. The review is of The Square and the Tower: Networks and Power from the Freemasons to Facebook, by Niall Ferguson.

The Square and the Tower: Networks and Power, from the Freemasons to Facebook,

Ferguson suggests that one view of history is from the top down: Leaders make things happen; the masses merely react. Think of the tower in this book’s title overlooking the town square.

Another view, as proposed by Ferguson, is that history has pivotal moments in which networks of people are the driving force. In these instances, it’s the leader who must react—or lose power.

Other networking nuggets include, “You may already be familiar with the idea that you are, at most, six friendships away from any other person on the planet…. Did you also know that your next job opportunity will likely come from a cocktail party acquaintance instead of a close friend (the ‘strength of weak ties’)?”

Cornelius cites smartphones, Twitter, and cryptocurrencies as examples of network ascendancy. Yet he concludes drolly, “Surely this all signifies the dawn of a new era, the inexorable final triumph of networks over the ossified hierarchies of the past? If history is any guide, don’t count on it.”

”More Kids Sketch Female Scientists” is the title of a News item in Science, March 23, 2018. Researchers studied 20,860 pictures drawn by students age 5 to 18 over five decades. “In the 1960s and 1970s,” Science reports, “less than 1 percent of students depicted scientists as female, but that rose to an estimated 34 percent by 2016. Among girls, the figure grew from about 1 percent to more than 50 percent.”

Science notes, “The trend in how children perceive scientists parallels an uptick in the number of actual female scientists. Over roughly the same time period—from 1960 to 2013—the percentage of women holding science jobs rose from 28 percent to 49 percent in the biological sciences, from 8 percent to 35 percent in chemistry, and from 3 percent to 11 percent in physics and astronomy.” ds