CLEARING THE MPG AIR, IF NOT THE AIR ITSELF PART 1

CORPORATE AVERAGE Fuel Economy (CAFE) has the news all agog with the Trump administration undoing yet another Obama administration action, this one involving fuel economy and emissions of new cars and light trucks. Scott Pruitt is Trump’s point person as head of the U.S. Environmental Protection Agency. At least as I write this, he is….

There are nuances a’plenty, indeed enough to split this into Part 1 today followed by Part 2 tomorrow.

The words CAFE and EPA are key in what follows.

CAFE vs EPA. Current CAFE standards require each automaker to progress toward achieving a fleet-weighted average of 54.5 mpg for its cars and light trucks in the 2025 Model Year. The 2016 standard was 35.5 mpg. Let’s call these CAFE mpgs, as opposed to real-world mpgs.

Meanwhile, in a January 11, 2018, article summarizing government data for the 2016 Model Year. Reuters reports “U.S. Vehicle Fuel Economy Rises to Record 24.7 MPG: EPA.” Let’s call this 24.7 an EPA mpg, again as opposed to what a real driver might achieve.

Briefly, CAFE mpgs are not the same as EPA mpgs posted on new car Monroney stickers and collected in the annual EPA Fuel Economy Guide. They’re even administered by different parts of government. CAFE is regulated and enforced by the National Highway Traffic Safety Administration, part of the U.S. Department of Transportation. The EPA, a separate agency, is charged with the responsibility of measuring and reporting fuel economy, this latter, with the U.S. Department of Energy. 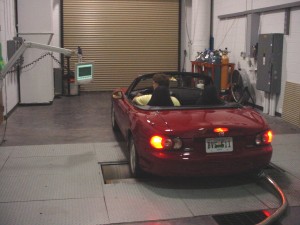 A test lab’s dynamometer yields data on a car’s emissions and fuel economy. This is more accurate and reproducible than any single road test. Image from fueleconomy.gov.

Both CAFE and EPA mpgs originate in vehicle dynamometer testing (think treadmills for cars) that follows carefully orchestrated patterns of acceleration, cruising, braking, and idling. The City and Highway cycles are examples of these driving patterns; Combined mpg is a weighting of 55-percent City and 45-percent Highway.

CAFE calculations use Combined values of these raw data. However, over the years, in efforts to give consumers a better estimate of real-world mpg, the EPA has applied additional conditioning of the data—fudging, if you like. Back in 2012, it was estimated that these adjusted EPA mpgs were perhaps 20–25 percent less than CAFE mpgs. As an example, a car scoring 30 mpg Combined in raw data might get around 23 mpg in actual driving.

Enhancing the Fudge. In fact, the real world might require a bit more fudging. For example, consider the 2016 CAFE standard of 35.5 mpg. EPA’s reported 24.7 mpg for 2016 represents a 30.4-percent shortfall from CAFE to something resembling the real world.

Thus, for example, 2025’s 54.5 mpg CAFE would equate to an EPA (and sorta-real-world) 37.6 mpg. This would still be a considerable automaker challenge during the nine years from 2016 to 2025, especially with consumers enjoying inexpensive gasoline and hankering for big pickups and SUVs.

Enter Scott Pruitt. According to Forbes, April 2, 2018, Scott Pruitt, current head of the U.S. Environmental Protection Agency, is expected to announce a 2025 rollback (in terms of CAFE numbers, remember) from 54.5 to 34.5 mpg. As I write this, Pruitt hasn’t conformed the 34.5 figure.

Note, though, 34.5 CAFE mpg works out to around 24 EPA/sorta-real-world mpg—implying a backpedaling from the U.S. fleet average achieved in 2016.

There’s an argument that it fits Pruitt’s apparent intention of disabling EPA in any way he can. Prior to being appointed head of the agency, Pruitt spent much of his efforts as Oklahoma attorney general suing the EPA on one matter or another.

Tomorrow in Part 2, California enters the picture, along with other states comprising more than a third of the domestic auto market. And then there’s China, return on investment, and views of a guy named Ford.

It ain’t over, folks. ds