HOLMES, DEDUCTION, THE KLAN, AND A LESS THAN PERFECT RESOLUTION

AN EXAMPLE of Sherlock Holmes’ deductive skills lies in his encounter with the Ku Klux Klan described in Dr. John H. Watson’s chronicle of “The Five Orange Pips.” This adventure is also noteworthy in that fate foils Holmes’ effort to gain complete retribution.

Elias Openshaw, an American expatriot residing in England, receives a mysterious correspondence containing five orange pips and the inscription K.K.K. Upon receiving this letter postmarked Pondicherry, India, he shrieks, “K.K.K. My God, my God, my sins have overtaken me.” Elias’s nephew John says, “What is it, Uncle?”

Seven weeks later, Elias is found face down in a pool, drunk—and dead. Suicide or….? 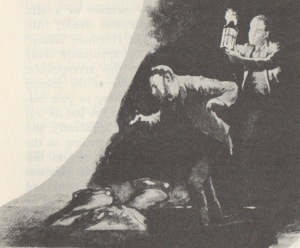 “We found him face downward in a little green-scummed pool, which lay at the foot of the garden.” This and the following illustrations by Sidney Paget for the Strand Magazine, November 1891.

Then, Joseph Openshaw, John’s father, receives a similar missive: five orange pips and K.K.K., this one postmarked Dundee, Scotland. Three days later, Joseph dies of a shattered skull after falling into a deep chalk-pit. Death from accidental causes or ….?

For two years and eight months, John Openshaw hopes that “this curse had passed away from the family.” Then John too receives an orange-pip K.K.K. correspondence, this one postmarked London, and he consults Holmes. 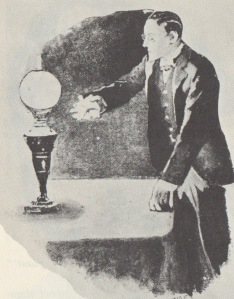 “Who is this K.K.K., and why does he pursue this unhappy family?” Watson asks.

Holmes responds, not for the first time, with a discourse on the finiteness of memory: “I say now, as I said then, that a man should keep his little brain attic stocked with all the furniture that he is likely to use, and the rest he can put away in the lumber-room of his library, where he can get it if he wants it.”

Holmes retrieves “the letter K of the American Encyclopedia” and offers the following: “Ku Klux Klan. A name deriving from a fanciful resemblance to the sound produced by cocking a rifle.”

Holmes continues, “This terrible secret society was formed by some ex-Confederate soldiers in the Southern States after the Civil War…. Its power was used for political purposes, principally for the terrorizing of the negro voters…. For some years the organization flourished, in spite of the efforts of the United States Government and of the better classes of the community in the South.”

The very next day, the morning newspaper has a headline “which sent a chill to my heart,” says Watson: “Holmes, you are too late.” John Openshaw is “the victim of an unfortunate accident” near the Waterloo Bridge. 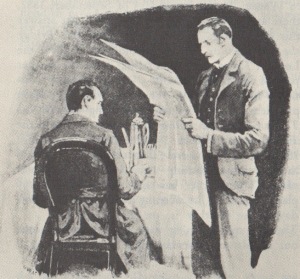 Using Lloyds registers of shipping vessels, Holmes identifies the barque Lone Star, out of Texas, as having visited Pondicherry and Dundee at the appropriate times and just now leaving London for Savannah, Georgia. There are only three Americans on its crew, the captain and his two mates.

Holmes posts a letter to “Captain James Calhoun, Barque Lone Star, Savannah, Georgia.” By way of personal retribution, it contains an inscription, “S.H. for J.O,” and five orange pips. Holmes also cables the Savannah police “that these three gentlemen are badly wanted here upon a charge of murder.”

The Lone Star is lost in one of the “equinoctial gales that year.” Holmes solves the crime, but is foiled in capturing the criminals. ds