“TOM HANKS, Rita Wilson to Star in Los Angeles Production of ‘Henry IV.’ ” So reads a February 13, 2018, headline in Variety. This play is a production of the Shakespeare Center of Los Angeles, SCLA, being performed June 5 to July 1, 2018, at the Japanese Garden on the West Los Angeles Veterans Affairs campus.

There are fascinating aspects of this, including mega-star Tom Hanks and Rita Wilson’s involvement, a happy resolution of land-use disputes concerning the VA campus, and Tony Award-winning Daniel Sullivan’s challenge of combining Shakespeare’s Henry IV Part 1 and Henry IV Part 2 into a single play of reasonable length. Here, I glean tidbits from these, with more than a walk-on role played by theatrical great Orson Welles.

Tom Hanks and his wife Rita Wilson have been sponsors of and participants in SCLA for 26 years. A neat tidbit: Back in the late 1980s, Rita went to an open casting call for an SCLA predecessor’s production of Shakespeare’s As You Like It. SCLA Founder and Artistic Director Ben Donenberg recalls, “She did an incredible job [and earned the role of Celia]. Then, on opening night… we looked out into the audience and there was Tom Hanks and a bunch of stars…. Rita shared with us she was married to Tom Hanks. We had no idea.”

In the SCLA Henry IV production, Tom will play Falstaff, the often rambunctious mentor of Prince Hal, a youth destined to become one of England’s most famous monarchs, Henry V. Rita will also play a leading role.

The American Civil Liberties Union brought a lawsuit in 2014 against the U.S. Veterans Administration for allowing the West LA VA facility to be used for non-veteran activities such as an Enterprise Rent-A-Car location, a Marriott hotel laundry, and television set storage. SCLA, with a three-decade history of performances at the Japanese Garden, was caught up in this.

The ACLU lawsuit was settled in 2015. As described in a KPCC radio interview, February 12, 2018, SCLA now has a 5-year agreement to stage productions at the Japanese Garden. Donenberg says, “We have veterans working backstage on scene production, costumes, lighting, sound, communications, IT, and box office.”

What’s more, 2000 members of the military and veteran communities will be given two free passes to Henry IV here, on a first-come, first-served basis. The general public’s tickets go on sale April 23, with a separate signup list.

Cutting the Henrys down to size is the job of director and Tony Award recipient Daniel Sullivan. Henry IV Part 1 and Henry IV Part 2 have a combined running time exceeding four hours, not counting intermissions. On the other hand, in the L.A. Theatre Work’s wonderful production of Orson’s Shadow, Austin Pendleton’s play on the subject, legendary drama critic Kenneth Tynan says, “The King Henry plays are the most exhilarating Shakespeare ever wrote.”

Director Sullivan will focus on the evolving relationship of two principal characters, Falstaff and his protégé Prince Hal.

Orson Welles was fascinated, some say obsessed, by this Falstaff/Prince Hal relationship. As a student at Todd School for Boys, he and his own mentor, Roger “Skipper” Hill, conceived of an Everybody’s Shakespeare. In 1939, Welles produced Five Kings, a Broadway stage adaptation of five Shakespeare history plays, Henry IV Part 1, Part 2; Henry V; Henry VI; and Richard III. Incidental music for the play was composed by Aaron Copland. Alas, even with extensive cuts, the play was overly long and had a short life. 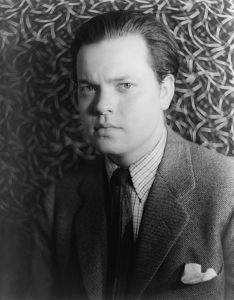 Welles’ Chimes at Midnight, a 1960 stage production, focused on Falstaff, portrayed by Welles, and Prince Hal, at first his admiring follower but later outgrowing the buffoonish old man. Again, the play met with only modest approval, though Welles said at one point, “This is only a rehearsal for the movie….” 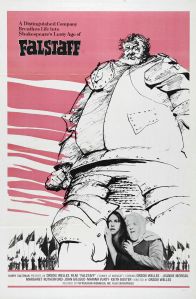 In 1964, Welles scammed a Spanish film producer into ostensibly backing a version of Treasure Island, but using the sets and locations for filming Chimes at Midnight. For instance, the Admiral Benbow Inn (Treasure Island) doubled as Mistress Quickly’s Boar’s Head Tavern (Chimes).

Welles as Falstaff in Chimes at Midnight. In Orson’s Shadow, Orson says to Kenneth Tynan, “I have been working on this play since I was at the Todd School for Boys. Even then, Ken, even then I wanted nothing more than to become a fat old man. This is a realization of a life-long dream.”

Welles showed his direction and production skills in working around this dual-production scam and in accommodating budget-limited availability of the principals. Wikipedia notes, “Welles later joked that during one scene which included seven principal characters, none of the actors were available and stand-ins were used for over-the-shoulder shots of all seven characters.”

Today, Chimes at Midnight, 1965, is considered a Welles film masterpiece, some say even greater than his Citizen Kane. He called it his favorite film.

Welles wrote that the Falstaff/Prince Hal tale was a “betrayal of friendship.” Both the original Shakespeare Henry IV Part 2 and Chimes at Midnight have a harrowing scene at Hal’s coronation: Falstaff says, “My king, my Jove! I speak to thee, my heart.” Hal responds, “I know thee not, old man, fall to thy prayers. How ill white hairs become a fool and a jester.”

Like Welles and Hanks, I’d find Falstaff’s a preferable role to Hal’s. ds