MY FAVORITE Frankenstein tale is Mel Brooks’ hysterical Young Frankenstein, though I also admit to reading Mary Wollstonecraft’s Frankenstein: Or, The Modern Prometheus in Leonard Wolf’s annotated edition. What’s more, the Frankenstein monster has already made an appearance here at SimanaitisSays. So I guess I’m something of a Frankensteinophile.

Mary Wollstonecraft Shelley, 1797–1851, English novelist, dramatist, travel writer, author of Frankenstein: Or, The Modern Prometheus. This and other images from Science, January 12, 2018.

It was a dark and stormy night at Lord Byron’s home near Geneva, Switzerland, June 1816, when guests entertained themselves by inventing ghost stories. Miss Wollstonecraft was 18 and not yet wedded to poet Percy Shelley (who, although married at the time, had accompanied Mary to Switzerland).

More than 200 years later, the monster of Wollstonecraft’s tale made the January 12, 2018, cover of Science, the weekly magazine of the American Association for the Advancement of Science. 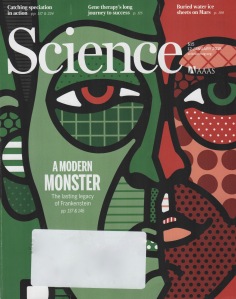 This AAAS magazine has a special focus on “A Modern Monster: The Lasting Legacy of Frankenstein.” Its editorial is titled “Frankenstein Lives On.” Feature articles discuss “The Long Shadow of Frankenstein,” “How a Horror Story Haunts Science,” and “Taming the Monsters of Tomorrow.” Scientists also offer suggestions for “The Next Generation’s Frankenstein films.” And there’s even a book review: Frankenstein: Annotated for Scientists, Engineers, and Creators of All Kinds (MIT Press),

On playing God. It might be argued that scientists shouldn’t “play God” with the products of their research. On the other hand, as DNA co-discoverer James Watson wrote, “If scientists don’t play God, who else is going to?”

Yet, as noted in the Science editorial by Dutch professor Henk van den Belt, “… researchers must be willing to assume responsibility for the vicissitudes of their technological creations, help them to acquire a suitable role in society, and provide adequate follow-up care if necessary.”

Experimental work perhaps 20 years before may have inspired Mary Wollstonecraft’s animation of her monster.

Galvani incorrectly conjectured that there was some sort of vital fluid involved or an action he called “animal electricity.” In fact, Alexander Volta, another Italian scientist, identified in 1800 that the dissimilar metals were forming a battery generating electricity; the frog leg serving as the battery’s electrolyte.

A Glossary of Frankenwords. Henk van den Belt’s Science editorial notes that “Researchers, especially in the life sciences, are understandably anxious about being tainted with the “F-word.” On the other hand, Science author Jon Cohen notes that, “Along with fears, the Frankenstein story has inspired hundreds of whimsical names for products and phenomena.

I believe that Frankensteinophile may be my own invention. ds