“FRANZ SCHUBERT was just making up those Impromptu piano pieces as he went along.”

“And so is Tchaikovsky’s Symphony No. 6.”

“Cinderella’s missing slipper was made of glass.”

These quotes are, respectively, not really true, true, actually not, and who’s to say. Tidbits gleaned from here and there follow.

The word “impromptu” means improvised, done without planning, or unrehearsed. It comes from Latin, in promptu, in readiness. Merriam-Webster dates the word’s first appearance to 1683.

And, in fact, in music, an impromptu is a composition suggesting improvisation. This, apparently, is more difficult than it sounds, thus making Schubert’s piano pieces all the more wondrous. You can hear his Impromptu No. 4 played by Artur Rubenstein at YouTube.

Ludwig van Beethoven, 1770–1827, German composer and pianist, along with Bach and Brahms, one of Classical’s Three Bs.

Beethoven’s Piano Sonata No. 8 is, indeed, commonly known as Sonata Pathétique. The name arose from Beethoven’s publisher, who found the piece replete with tragic sonorities. You can decide here after listening to Daniel Barenboim’s rendering. 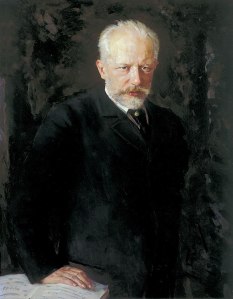 By contrast, Tchaikovsky’s Symphony No. 6 being called Pathétique is merely an error in translation. Tchaikovsky entitled this piece Патетическая (Pateticheskaya), Russian for “passionate” or “emotional.” The mistranslation into French Pathétique stuck in countries other than Russia.

Cinderella’s slipper is rather more contentious. When I was a kid, I had opportunity in Grades Four through Six to learn French sort of total-immersion style. For an hour each school day, a dear, artful, and patient woman of Parisian birth assembled groups of us in a room where utterly no English was permitted, even from the very start.

Alas, I’ve forgotten her name, though I’m sure we all called her properly Madame.

What’s more, our instruction was oral only, with no written French to interfere with proper pronunciation of words such as monsieur. (I was baffled by French spelling in Seventh Grade where the written language was introduced.)

An annual project with Madame was a play, performed entirely in French, of course. My first year, our play was Cendrillion, and let’s not rhyme this with “ten million.” It’s, sort of, sahn-dree-on, with a properly Parisian nasal “on,” the “n” almost silent.

My role in Cendrillion was appropriate to my first-year status. I was merely a court attendant whose sole dialogue, with a little bow, was ”Bonjour, mes amis. Bienvenue au palais.”

I don’t recall it bringing down the house.

According to Wikipedia, Charles Perrault’s 1697 Cendrillion introduced the fairy godmother, the pumpkin, and the slippers of glass to the classic tale.

On the other hand, Madame begged to differ. As she told it, en français naturellment, Verre is French for glass. Vair is old French for fur. Cinderella’s slippers were originally fur, which made a lot of sense to me at the time.

Today, no less than Snopes disavows this charming tale of fur footware. And, alas, if only Madame could provide an updated opinion. ds