IN KEEPING with the book’s title, E.T. Bell’s classic Men of Mathematics has only 24 women out of the more than 300 personages listed in its index. 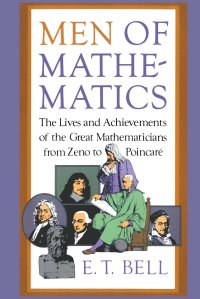 As a source book in mathematics, my 1937 edition is positively ancient; even its latest reissue was in 1986. On the other hand, the book’s subtitle, “The Lives and Achievements of the Great Mathematicians from Zeno to Poincaré,” represents the book’s chronological span, if not gender recognition.

I was encouraged to examine Bell’s classic after my recent celebration of Marina Ratner and Maryam Mirzakhani, two extremely talented mathematicians who passed away earlier this year.

Of the 24 women listed, several are recognized as benefactresses of mathematics rather than practitioners. For example, Bell writes of Russia’s Catherine the Great, “Catherine, Peter the Great’s mistress before she became his wife, seems to have been a broadminded woman in more ways than one….” And, no, that one is only a vicious rumor.

Catherine was a special pal of Leonard Euler, 1707–1783, renowned for Euler’s Formula, the most elegant equation of all mathematics. Bell notes, “Catherine received the mathematician as if he were royalty, setting aside a fully furnished house for Euler and his eighteen dependents, and donated one of her own cooks to run the kitchen.”

Another Bell feminine citation is yet another royal: Queen Christine of Sweden was a favorite disciple of René Descartes, 1596–1650, French mathematician (the Cartesian coordinate system) and philosopher (“I think; therefore I am”).

In 1646, Queen Christine heard of Descartes. Bell writes, “This somewhat masculine young woman was then nineteen, already a capable ruler, reputedly a good classicist, a wiry athlete with the physical endurance of Satan himself, a ruthless huntress, an expert horsewoman who thought nothing of ten hours in the saddle without once getting off, and finally a tough morsel of femininity who was as hardened to cold as a Swedish lumberjack.”

However, Bell continues, “With all this, she combined a certain thick obtuseness toward the frailties of less thick-skinned beings.” Apparently Descartes recognized an obtuseness as well: Bell writes, “His opinion of her mentality… appears to have been respectful but low.”

Maybe not my kinda woman, but worthy of more research someday.

Other names are unexpected. In discussing James Joseph Sylvester, British-American 19th century mathematician, Bell observes, “… it is rather surprising to find that Sylvester’s most distinguished pupil was a young woman, Florence Nightingale, the first human being to get some decency and cleanliness into military hospitals—over the outraged protests of bull-headed military officialdom.”

Nightingale exhibited a gift for mathematics from an early age. Among her achievements was popularizing the graphical presentation of statistical data, the familiar pie chart, for example. In 1858, Nightingale was elected the first female member of the Royal Statistical Society and later an honorary member of the American Statistical Association.

Last, Praskovia Ivanovna Lobatchewsky, aka Praskovia Alexandrovna Lobachevskaya, makes a cameo appearance in Bell’s Men of Mathematics as the widowed mother of Nikolai Ivanovich Lobachevsky, Russian mathematician renowned as the Copernicus of Geometry. She deserves credit, as Bell notes, in preparing her three sons “for school as best she could, and had the satisfaction of seeing them accepted, one after the other, as free scholars at the Gymnasium.”

Nikolai Ivanovich Lobatchewsky, 1792–1856, Russian mathematician. This image is in lieu of his widowed mother’s, who, poor woman, apparently never had time to sit for a portrait.

Her kid Nikolai is remembered for inspiring Tom Lehrer to write an unforgettable song in his honor. Lehrer mentions an index in this song (“Index I copy from old Vladivostok telephone directory…”); and, of course, it’s Bell’s index that got me into all this. ds