TO A MORE APPROPRIATE KINGDOM, THIS TRULY COULDN’T HAPPEN

A TEXTBOOK is being withdrawn from Saudi Arabian schools because it contains a photo of the late King Faisal, a Saudi prince at the time, signing the UN Charter in 1945. Next to the prince sits Yoda, the diminutive Jedi Master from Star Wars.

Bellwether of the body politic, satire genuinely is.

BBC News Online gives full details: Saudi artist Shaweesh was inspired by a photo of late Egyptian President Anwar Sadat next to Mickey Mouse during a Disneyland visit. Shaweesh is known for his respectful satire (more is out of the question) in this extremely conservative country. And in 2013 he published a series of photographs in which, BBC says, “symbols of American pop culture—ranging from Captain America to Darth Vader—are superimposed onto archive photos of historical events.” 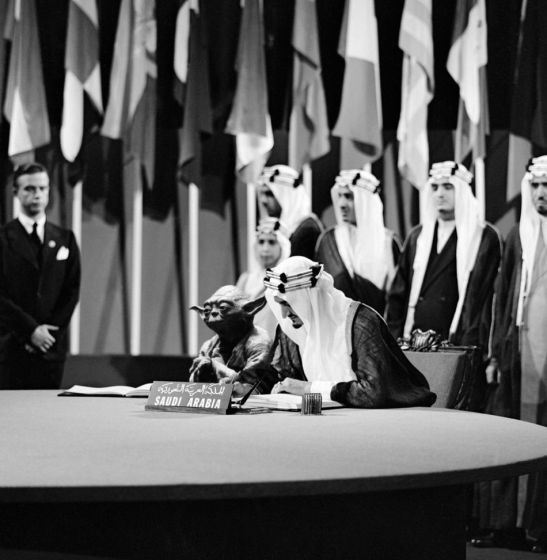 Shaweesh is cited as saying “he included Yoda in the photo of King Faisal—who was then serving as his father Ibn Saud’s foreign envoy—because they were both ‘wise, strong, and always calm.’ ”

As to the photo’s appearance in a social studies textbook, Shaweesh continued, “Someone should have checked the image before printing.”

Whatever are Saudi kids learning?? Image from the Saudi Ministry of Education.

According to the BBC report, Saudi Arabia’s education minister Ahmed al-Issa said a committee was looking into the “unintended mistake.”

Does this raise a question of when a mistake is intended?

This question may seem overtly philosophical, but then, to speak Yoda again: To a more appropriate kingdom, this truly couldn’t happen.

The London Review of Books, September 7, 2017, had a most interesting article on this, “The Saudi Trillions,” by Malise Ruthven. The country is described by Ruthven, a specialist on Islam, as “a place often defined by its contradictions, in which tribal codes of desert and oasis—puritanical, patriarchal, frugal and austere—co-exist and frequently clash with lavish displays of wealth and such emblems of modernity as air-conditioned shopping malls, designer boutiques and six-lane highways flashing with supercharged vehicles exclusively driven by men.”

Among Saudi Arabia’s Wahhabi Islamic interpretations are strict prohibition of socializing between unrelated males and females, a ban of practicing or proselytizing non-Wahhabi faiths, and a requirement for stores to be closed during prayer times. Modest dress for women is strictly enforced, as is women’s prohibition from driving. Obviously, alcohol and tobacco are banned. And don’t even ask about LGBTQ. In charge of all this social engineering is Saudi Arabia’s religious police, the mutaween, “volunteers,” controlled by the Commission for the Promotion of Virtue and Prevention of Vice. 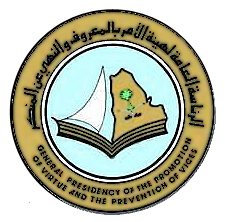 The seal of Saudi Arabia’s Commission for the Promotion of Virtue and Prevention of Vice.

Notes the LRB’s Ruthven: “According to foreigners who have lived outside the privileged enclaves of expat colonies…. the sense of fear is ubiquitous.” Ruthven quotes a Brit academic who taught English in the kingdom: “Meeting and talking with Saudis, one soon perceives the fear that lurks behind the smiles, the sense that people are constantly aware of being watched, censored and condemned.”

All this promotion of virtue and prevention of vice hasn’t prevented carnage in Saudi Arabia’s relatively brief (only since 1932) history. Ruthven cites “horrors… similar to the violence committed by Islamic State or al-Quiada today.” Also noted: “According to the now disbanded Saudi Civil and Political Rights Association, one in every six hundred Saudis is in jail because of their opinions or political activities. Since the whole judicial system is based on confessions extracted under torture or the threat of torture, it is physical violence, not the Quran, that is the ‘true foundation of the law.’ ”

With this crowd, Yoda would not likely be seen again. Image from dailymail.co.uk.

Think the Republic of Gilead in Margaret Atwood’s The Handmaiden’s Tale. And think hard. ds

2 comments on “TO A MORE APPROPRIATE KINGDOM, THIS TRULY COULDN’T HAPPEN”