ON POLITICIANS AND HYPOCRISY

THESE DAYS, “politician” and “hypocrisy” are naturals in a word-association test. Our current lamentable state encouraged me to do some etymological research on this word pair. My old pals Merriam-Webster and The Compact Edition of the Oxford English Dictionary (2 Volume Set),

1971, were my starting points. Internet sleuthing ensued, followed by some personal ruminations.

Politician. Merriam-Webster says, “a person experienced in the art or science of government.”

Geez, right off I sense a problem posed by that word “experienced.” Not “sycophantic;” not “nepotistic;” not “partisan,” not “entrenched.”

But then Merriam-Webster clarifies matters, sort of, “often disparaging: a person primarily interested in political office for selfish or other narrow usually short-sighted reasons.”

This is more illuminating than I thought it would be. I can’t wait to get to “hypocrisy.” 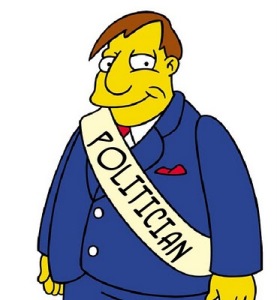 M-W cites a first known use of “politician” in 1589. I suspect there had been selfish, short-sighted people involved in government before then, but they were called the Royal Court.

The Compact Edition of the Oxford English Dictionary offers as its first definition, “A politic person; chiefly in its sinister sense, a shrewd schemer, a crafty plotter or intriguer, Obs.”

This abbreviation might mean obsolete or obscene; I then checked the OED glossary.

It’s obsolete. These days, though, what with The Mooch and all, it’s worth checking.

People sounded better than they spelled in those days.

I confess I have no idea the meaning of Driʃts, with ʃ, a long s as used in our Declaration of Independence: “Life, Liberty and the pursuit of Happineʃs.”

Politician and its related politic trace back to the Greek πολιτικός, pertaining to citizens or civic matters. By the way, they have nothing to do with “polite,” which traces to the Latin word for polished, refined, cultivated.

I am not surprised.

Hypocrisy. Merriam-Webster describes “hypocrisy” as “a feigning to be what one is not or to believe what one does not: behavior that contradicts what one claims to believe or feel; especially: the false assumption of an appearance of virtue or religion.”

The OED concurs: “The assuming of a false appearance of virtue or goodness, with dissimulation of real character or inclinations, esp. in respect of religious life or beliefs.”

How come modern associations pop so easily to mind?

In fact, though, hypocrisy’s etymology is rather more benign. Its Greek υποκρισία traces to theater, meaning to play a part, to pretend. How hypocrisy’s meaning evolved may have to do with the general reputation of theater folk through the ages.

The OED’s earliest citation from 1235 is baffling (my early Middle English is weak), but the one from 1300 makes a bit more sense: “O pride becums Ypocrisi.”

Western Civ isn’t the only one suggesting hypocrisy’s bad rap. In Islam, for example, the concept gets a stern warning from the Prophet Muhammad: “Whoever has the four [attributes following] will be a pure hypocrite: 1. Whenever he is entrusted, he betrays. 2. Whenever he speaks, he tells a lie. 3. Whenever he makes a covenant, he proves treacherous. 4. Whenever he quarrels, he behaves in a very imprudent, evil and insulting manner.” 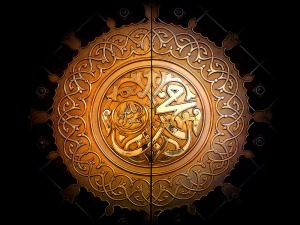 “Muhammad the Apostle of God” is inscribed on the gates of the Prophet’s Mosque in Medina. This image from Wikipedia by AishaAbdel. There is disagreement within Islam about visual depictions of Muhammad, so I’m playing it safe here.

Did the Prophet nail “hypocrisy” or what? ds

This entry was posted on July 29, 2017 by simanaitissays in I Usta be an Editor Y'Know and tagged hypocrisy etymology, long s looks like f "Happinefs", politician etymology, Prophet Muhammad on hypocrisy.