THE TERM “witch hunt” is appearing with increasing regularity in the news, and this has encouraged me to investigate the real thing, not just in relation to cornered politicos such as Senator Joseph McCarthy of the early 1950s and anyone else who might come to mind these days.

I begin with helpful sources, Merriam-Webster and The Compact Edition of the Oxford English Dictionary, 1971. I conclude with a review of The Physick Book of Deliverance Dane, by Katherine Howe.

Witchcraft at Salem Village, 1692, illustration from Pioneers in the Settlement of America: Florida in 1510 to California in 1849, by WIlliam A. Crafts, 1876.

Merriam-Webster cites “a searching out for persecution of persons accused of witchcraft” as the term’s primary meaning, with its first use 1885. “Deliberate harassment of those (such as political opponents) with unpopular views” is listed second.

The M-W website adds a “Trend Watch” feature with its “Trump: ‘Single Greatest Witch Hunt.” It notes, “Witch hunt bedeviled and charmed its way to the top of our lookups on May 18th, 2017, after the word made an appearance in a tweet by Donald Trump.” 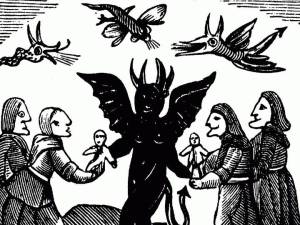 M-W observes that the term has a curiously recent record of use, the late 19th century, given that “actual hunting of ostensible witches” occurred two hundred year before. Witch hunt’s political use has been around since the 1920s. It reached a high point, some would say reductio ad absurdum, in the early 1950s with the Red Scare tactics of Senator Joseph McCarthy. 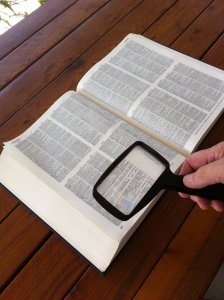 Perhaps reflecting English magic, the Compact Edition of the Oxford English Dictionary, 1971, devotes more than three of its microproduced columns to the word “witch,” including an earliest reference c. 1100 and the word wicca. Curiously, the OED’s primary definition is “a man who practices witchcraft or magic.” Is this misogynistic or what?

There is no OED 1971 listing for witch hunt, the nearest being the more confidently satisfying witch-finder, “One formerly employed to search for and obtain evidence against witches.” A reference from 1646 is cited: “To save the trouble and Charges of the witch-finder, they will undertake to try the Witch of themselves.”

This sounds rather less civilized than the Salem witch trials of 1692-1693, even though the latter were hardly jurisprudence at its best.

The Physick Book of Deliverance Dane,

The Physick Book of Deliverance Dane is triply a historical novel of the Salem witch trials, a modern adventure of academic life at Harvard, and a crackling good mystery on both levels. Deliverance Dane is a “connynge woman,” one perceived as having supernatural powers in 1690s Massachusetts. Dane’s physick book is her collection of cures, potions, poultices, and the like.

Connie Goodwin is working on her doctoral dissertation at Harvard, but interrupts her studies to handle the sale of her grandmother’s house near Salem. There, her curiosity is captured by a yellowed parchment containing the name Deliverance Dane.

The novel moves back and forth between Dane’s 1690s Salem and Connie’s 1991 Harvard, each with its own intrigue.

In actuality, Deliverance Dane was one of those prosecuted in the Salem witch trials of 1692–1693. Though Dane is quoted from trial records as admitting she and other witches conjured her dead father’s specter to torment people, she escaped with her life. Twenty other people, including fourteen women, were executed. Five others, including two infants, died in prison.

According to Andover, Massachusetts, records, the real Deliverance Dane died in 1735. I won’t give away her travails in the book, nor Connie’s. However, the book describes in harrowing fashion what a real witch hunt used to be. ds

This entry was posted on July 13, 2017 by simanaitissays in I Usta be an Editor Y'Know and tagged "Merriam-Webster", "The Compact Edition of the Oxford English Dictionary", "The Physick Book of Deliverance Dane" by Katherine Howe, connynge woman = witch, witch hunt, witch-finder.