WHAT SINGLE SOUND best characterizes your home city or country? For the latter, national anthems are easy choices, but not what I have in mind. This quest, by the way, grew from a dinner conversation 24 years ago at the Chelsea Arts Club in London, England.

The Chelsea Arts Club, London, England. Above, as it was during my 1993 visit; below, the same venue during a 2012 event. The 1993 image by the author; the more recent one from littlelondonobservationist.

There were only two Yanks in residence, so our hosts asked us first for an iconic sound of America. Being a car nut, I suggested the characteristic burble of a V-8 engine. Seemingly, even when others of the world’s automakers choose V-8 power, the resulting exhaust notes aren’t quite that burble.

A proper burble from a 1966 Ford Mustang V-8. Video and image from Spectralghost.

The other American was a poetess on sabbatical from a southeastern college. Reflecting this, she had a more artful response: the classically lonesome whistle of an American steam locomotive. It’s clearly different from those of Britain or elsewhere in Europe.

What would you choose as an iconic American sound?

Our hosts at Chelsea Arts Club, many of them Londoners, were nearly unanimous in choosing the peal of Big Ben as their iconic Brit sound.

Big Ben, the largest of five bells in the Clock Tower of the Houses of Parliament, London, England. Image from Britain Express. For a historical view see “Lofty London—1930.” Check out Eadwig’s sonic example.

This extended the game at Chelsea Arts Club to a search for icons country by country.

Switzerland proved an easy one—back in 1993: the clanging of those oversize bells hung around the necks of Swiss cows.

However, as a news update, according to dailymail.co.uk, the Swiss government proposed a ban on these bells in October of 2014, largely on the grounds of animal rights. Notes the Daily Mail, a “traditional 12-lb cow bell can reach volumes of 113 decibels,” resulting in a deafening of the cow.

Farmers claim the bells are critical to finding their stock in Alpine hills. Researchers say GPS devices could be fitted instead. Farmers say bells function in remote locations where GPS won’t work.

On to another European country: For Brits thinking about Spain, the iconic sound was a bull-fight crowd roaring Olé! in unison. More’s the pity.

I recall several responses for France. A cop car siren, apparently different from those of other countries: Err Ahh! Err Ahh! versus the American single scream of varying pitch. Another car sound was the characteristic beep of the Parisian taxicab.

My transatlantic contribution to this discussion was a musical one: Composer George Gershwin’s An American in Paris featured actual Parisian taxicab horns in its performances. 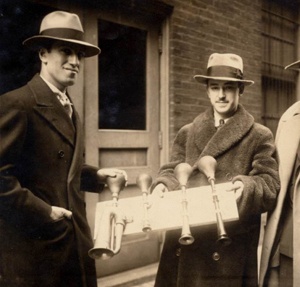 George Gershwin, left, and percussionist James Rosenberg hold four Parisian taxi horns using in performances of American in Paris, March 1 and 2, 1929. Image from The Gershwin Initiative, University of Michigan. For more on this UofM program, see “Shall We Dance? And Walk the Dog?

Once home again, I asked Wife Dottie about her iconic memories. One she suggested concerned her visit to Leningrad back in Soviet days. It wasn’t an iconic sound; it was an iconic non-sound: She said she didn’t hear the sound of Soviet children at play.

To this day, she recalls the relaxed feeling of freedom regained when driving back into Finland. She celebrated its bright colors and the laughter of its kids. ds