DID BESSIE Raiche’s solo flight on September 16, 1910, make her the world’s first female pilot? Uh, no. Frenchwoman Raymonde de Laroche had already piloted a Voisin aeroplane on October 22, 1909. And on September 2, 1910, a mere two weeks before Bessie’s flight, American Blanche Scott piloted a Curtiss into the air, albeit perhaps unintentionally. (I leave this last tale for another day.)

In any case, these other two women didn’t build their own aeroplanes, did they?

I heard of this pioneer aviatrix only recently, through a rerun of an Antiques Roadshow TV program. Along with other aviation memorabilia, a fellow shared a diamond-studded gold medal inscribed “First Woman Aviator in America” and a photo of Bessie. In learning more, I found that Bessica Faith Medlar Raiche was quite a person.

According to The New York Times, Bessica Medlar’s father was an inventor. Her mother’s heritage traced to New England Pilgrims. Early on, Bessie “became an accomplished musician and also took great interest in painting in oils and water-colors. She was also a noted linguist and as a young woman had mastered several modern languages.”

Bessie was a proto-feminist, a bloomer-wearing automobilist in the early 20th century. As she said later of her lifestyle, “I drove an automobile, was active in sports like shooting and swimming, and I even wore riding pants and knickers.” She received an M.D. from Tufts University in 1903 and practiced dentistry in New Hampshire.

Bessie married François “Frank” Raiche, whose parents were from France. She traveled to France to study ivory miniature painting. Perhaps on August 8, 1908, she was at Le Mans to see Wilbur Wright’s famous demonstration.

Returning home to Mineola, New York, she and Frank proceeded to fabricate an aeroplane in their living room. Some say it was a Wright-type design; others say, and photos suggest, it was more Curtiss-influenced. 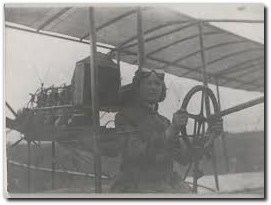 Bessie at the controls of the family biplane.

In favor of the Curtiss similarity, the Raiches, like Curtiss, used silk fabric in lieu of the original Wright’s cotton sealed with “canvas paint” and lightweight bamboo in place of spruce and ash. Also, the Raiche aeroplane had Curtiss-like trike gear.

The Raiches and Crout transported their aeroplane to nearby Hempstead Plains, New York, for testing. One story has it that Bessie, being the lightest of the three, was selected as pilot. And, on September 16, 1910, she and the Raiche-Crout aeroplane made five flights, the last one covering approximately a mile. This achievement was accredited by the Aeronautical Society of America. At an October 13, 1910, dinner, the group awarded Bessie her diamond-studded gold medal.

Bessie in her flying garb. Image from JDA Journal. Original photograph by Joseph Burt, October 11, 1910, from the Collection of Henry A. Liese.

The Aeronautical Society of New York was rather more male-focused: It reported, “A new biplane was constructed by François Raiche, in association with C.M. Crout, who built the motor. This machine was not unlike the Society’s in general design, but had some slight improvements, such as shock absorbers, and brakes on the rear wheels instead of only on the front one. Variations were also made in the measurements, so that the machine was smaller, and, it is hoped, would be faster. It proved to be the first machine built at Morris Park to get off the ground. It was tried out early in September, and Mr. Crout, who was operating it, made a successful flight of about fifty feet. Subsequently this machine was one of the features of the Aeronautical Exposition at Madison Square Gardens, and, later, went to Danbury, Conn., Fair.”

Though undated, the document’s mention of the Madison Square Garden Exposition suggests it was as late as 1919.

Bessica and Frank built two more craft as part of their French-American Aeroplane Company. These aircraft continued the use of lightweight materials, including piano wire in lieu of the traditional steel rigging. (The Wright Flyer’s rigging was bicycle-spoke steel.)

By 1920, the Raiches were living in Newport Beach, California, where Bessie continued her practice of medicine. She was one of the first women in the U.S. specializing in obstetrics and gynecology. In 1923, Bessie served as president of the Orange County Medical Association.

Bessie died, age 57, in 1932 of a heart attack. Unlike a lamentable number of aviation pioneers, she survived her flying days. Indeed, Bessie was more than a pioneer aviatrix. ds