BY 1925, CHINA had a good number of aircraft, most imported, though a few of its own manufacture. Following the 1912 demise of the Qing imperial dynasty, Sun Yat-sen served as president; he, the husband of Soong Ching-ling. Her Westernized name Rosamonde was cited in yesterday’s tale of the Rosamonde biplane, possibly the first aircraft manufactured in China.

Sun Yat-sen’s Kuomintang party rule was a brief one, with the army actually in control. Matters degenerated and by 1916 local warlords again dominated. With Sun’s death in 1925, leadership of the Kuomintang evolved to Chiang Kai-shek, husband of Soong Mei-ling, sister of Ching-ling/Rosamonde.

One suspects that Chinese aviation wasn’t the only thing discussed in Soong gatherings. Ai-ling, the eldest sister, was married to banker Kung Hsiang-hsi, one of the richest men of the early 20th century. 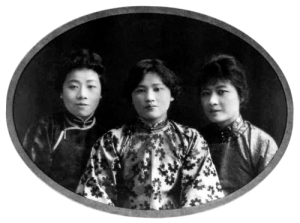 The Soong sisters in their youth. From left to right, Ai-ling, Ching-ling and Mei-ling.

Aviation, though, would have been an appropriate topic in the summer of 1926, when two Deutsche Luft Hansa Junkers G24 aircraft undertook a 12,400-mile journey from Berlin to Peking. This airline had been founded only earlier that year and the Peking Expedition, even with its 10 intermediate stops, was a significant achievement. 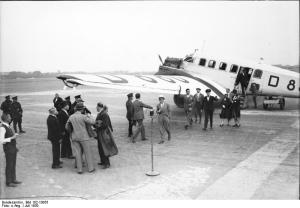 Some sources say the intent was to continue on to Shanghai, but military conflicts precluded this. However, Chronicle of Aviation

offers an interesting tale, datelined August 30, 1926, Peking: “Two Junkers G24s with German pilots arrive from Berlin; they left Germany on July 24 crewed by Soviet-German teams, but the Soviet pilots were refused entry to China because they had incorrect visas.”

Charles Lindbergh’s New York to Paris solo in 1927 generated enthusiasm for aviation around the world. Given that imitation is the sincerest form of flattery, the Chinese Chu Kiang aircraft proved especially flattering to Lindbergh’s achievement. 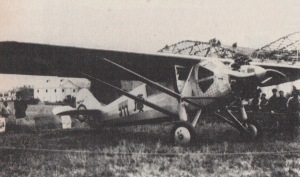 The Chu Kiang, evidently patterned after a four-seat Ryan Brougham, 1929.

The Chronicle of Aviation datelined this item January 14, 1929, Peking: “China has acquired one of its first aircraft, an exact copy of the Ryan Brougham, and thus resembling Charles Lindbergh’s Spirit of St. Louis. Piloted by Chang Wai-chung, the 250-hp Chu Kiang recently completed a 2500-mile flight across China.”

Beginning in the 1920s, a succession of air missions from Britain, France, Italy, the United States and the U.S.S.R. offered their military wares to China. The period was one of conflict among the Kuomintang Nationalists, the Communist Party of China and leftover warlords. Alas, this often resulted in combat, one against the other, of the same aircraft controlled by one faction or another. With Imperial Japan’s 1937 invasion of China came a common enemy.

And here followed a stirring bit of aviation history: the 1st American Volunteer Group of the Chinese Air Force, also known as the Flying Tigers. This group was largely the creation of Claire Lee Chennault, a retired U.S. Army Air Corps officer who lived in China, worked with Chiang Kai-shek and served as director of the Kunming flight school of the Chinese Air Force. In 1940, Chiang asked Chennault to present a plea for support in Washington, D.C.

By the way, China’s ambassador to the U.S. at the time was Soong Tse-ven, one of the Soong sisters’ three brothers. The other two were also high-ranking officials in the Republic of China.

Though the U.S. wasn’t formally involved in World War II as yet, Chennault was authorized by President Franklin Roosevelt to operate three fighter squadrons, each of around 30 planes, with volunteers from the U.S. Army Air Corps, Navy and Marine Corps. Officially, the pilots and support crew were members of the Chinese Air Force, with salaries roughly three times their previous U.S. pay. 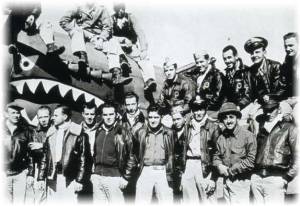 The Flying Tigers first engaged in combat on December 20, 1941, within two weeks after Pearl Harbor. Their success through innovative tactics brought a much-needed boost to American morale in early phases of the country’s World War II commitment. On July 4, 1942, the AVG was officially disbanded, replaced by the 23rd Fighter Group of the U.S. Army Air Force. 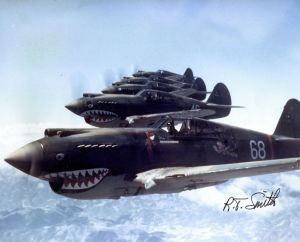 The Flying Tigers were credited with destroying 296 enemy aircraft, with a loss of 14 AVG pilots in combat. The shark-nose motif of their P-40 Warhawks remains one of the most recognizable of the world’s aircraft. ds