TWO SUCCESSIVE issues of Science magazine have multiple articles on science and government policy. Here I glean tidbits from two pieces in particular: Informing Policy with Science was a Science editorial published February 3, 2017. The focus of the next issue, February 10, 2017, was “Path of Evidence: Why Turning Data into Policy is Harder Than It Sounds.” I choose an automotive story, “the Moose Maneuver,” as one successful example.

Science magazine, published by the American Association for the Advancement of Science, February 10, 2017. The images following come from this issue.

The editorial was written by Barbara Schaal, 2017 AAAS President and Dean of the Faculty of Arts and Sciences at Washington University, St. Louis, Missouri. She began by noting “concerns that President Trump may not fully value science-based evidence…”

Here’s part of her argument in favor of science:

“To be clear, science is not a political construct or a belief system. It provides testable, fundamental knowledge of the world and how things work. Science alone cannot provide policy solutions to the many challenges that society faces, but scientifically informed perspective must be taken into account for decisions to be made by the best available evidence. To serve the public interest, information should be rigorously evaluated and held to the highest possible standard—a process that the practice and products of science help to accomplish. For policies to be successful, we must first understand the current state of knowledge so that policy-makers can design policy interventions that will be effective.”

Succinctly, the methodology of science is an effective tool for seeking truth.

The February 10, 2017, issue of Science presents challenges and examples of scientific evidence and its applications. Matters, it notes, aren’t straightforward: “Even in a ‘post-factual’ world, most researchers and officials believe the best evidence that science can muster should shape policymaking. But ideology, religious views, and economic concerns often complicate the path from evidence to policy.”

Examples abound, each not without complications: Educational techniques promoted to optimize learning; immunization programs designed to eradicate disease; environmental actions intended to better the world in which we live. 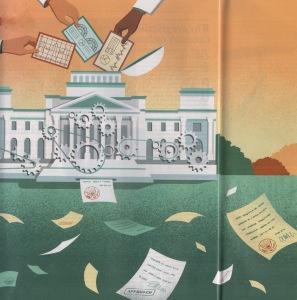 In an Evidence in Action sidebar, Science writer David Malakoff writes about “Putting the Brakes on Highway Death,” a summary of which is available here. It all started back in 1997 when the Swedish automotive magazine Teknikens Värld found a newly introduced Mercedes-Benz A-Class failing its Älgtest, its Moose Test.

The Moose Test is performed with belted occupants, simulated except for the driver, one assumes, and the trunk loaded to achieve the car’s maximum load. The car is piloted through this evasive maneuver, on a dry road surface, at increasingly higher speed. Failure is typically defined by knocking down cones or having a spinout.

The Mercedes A-Class failed spectacularly by overturning itself.

The notoriety of this, as described by Science writer David Malakoff, “ultimately led automakers and regulators in Europe and the United States to accelerate policies aimed at equipping all cars with electronic stability control (ESC), a combination of antilock brakes and throttle and steering sensors that studies had shown helped drivers keep control.”

Malakoff continues, “Engineers developed ESC in the late 1980s, and it started appearing on high-end cars in the 1990s. U.S. regulators required all new cars and small trucks to have ESC by 2012, and all new large trucks by 2019. Studies have found that ESC reduces fatal rollover risks by some 70 percent and fatal single-car wrecks by about half. It is one of the suite of evidence-based safety improvements, including seat belt and air bag rules, and features like rumble strips, that have helped cut annual highway deaths by about 50 percent in Europe and 15 percent in the United States since 2001.”

Rumble strips are another safety feature derived through scientific effort.