RECENTLY I mentioned the Wizard of Oz in an item On Satire, Self-Inflicted and Otherwise. In retrospect, after more research, I owe an apology to the Wizard.

True, the Wizard is a bully who must devise an alternative-fact universe: “Pay no attention to that man behind the curtain.”

Believe what the Wizard wants you to believe.

Our heroine with Professor Marvel, later (in color) the Wizard.

The Wizard cavorts with evil personages, specifically the Wicked Witch of the West. She says, “Just try and stay out of my way. Just try! I’ll get you, my pretty, and your little dog, too!” Her tone becomes ominous: “Going so soon? I wouldn’t hear of it. Why my little party’s just beginning…. Poppies… Poppies. Poppies will put them to sleep. Sleeeep. Now they’ll sleeeep.” 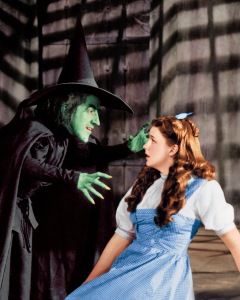 The Wicked Witch of the West with our heroine.

The Wizard surrounds himself with sycophants.[Thanks, Michael, for the correction.] Says the Guardian of the Emerald City Gates, “Orders are nobody can see the Great Oz! Not nobody, not nohow!”

The Guardian of the Emerald City Gates with our pals.

The Wizard exalts in pomposity: “Do not arouse the wrath of the great and powerful Oz…. Do you presume to criticize the Great Oz? You ungrateful creatures. Think yourselves lucky that I’m giving you an audience tomorrow, instead of 20 years from now.”

The Wizard is a posturing buffoon: “Frightened? Child, you’re talking to a man who’s laughed in the face of death, sneered at doom, and chuckled at catastrophe… I was petrified.”

The Wizard ridicules those of different body types: “Step forward, Tin Man! You DARE to come to me for a heart, do you? You clinking, clanking, clattering collection of collagenous junk!”

“And you, Scarecrow, have the effrontery to ask for a brain, you billowing bale of bovine fodder!”

The Wizard, soon to be sympathetically transformed.

However, to give the Wizard full due, he softens these last invectives with a transformed understanding: “As for you, my galvanized friend, you want a heart. You don’t know how lucky you are not to have one. Hearts will never be practical until they can be made unbreakable…. A heart is not judged by how much you love; but by how much you are loved by others.”

And, to the Cowardly Lion, “You, my friend, are a victim of disorganized thinking. You are under the unfortunate impression that just because you run away you have no courage; you’re confusing courage with wisdom”

Last, and most tellingly, the Wizard never once expresses lust for the child. And, in the end, she and her pals return to a semblance of normalcy. ds

4 comments on “A MOCKING APOLOGY”

This entry was posted on January 28, 2017 by simanaitissays in And Furthermore... and tagged "The Wizard of Oz" motion picture, an apology to the Wizard of Oz, President-in-Wanting.