WOMEN AT SimanaitisSays have been aviatory, artistic, aviatory and artistic, and a passle of other descriptions. But “plucky” is a new one, perfectly suited to Mrs. Frederick J. Linz of early 20th-century San Francisco.

An automobilist back when all automobilists were adventurous, Mrs. Linz performed especially bravely following the 1906 San Francisco earthquake, competed against the “stronger” sex in a 1907 cross-country endurance drive and organized the 1908 San Francisco Automobile Show. In 1909, she helped set up the Panama-Pacific Road Races. By 1910, there was word she had been transporting Nevada miners to roadhouse refreshment—and a bath. And, in 1911, she competed with a famed beauty in a match race as part of that year’s Panama-Pacific event.

I’d call that plucky, as did several news reports of the era.

Alas, I haven’t found much biographical data on Mrs. Linz, her full name, her dates and the like. I learned about her in Motoring in America: The Early Years. Editor Frank Oppel includes a 1910 article from The Outing Magazine titled “What a Woman Can Do with An Auto,” by Robert Sloss. My interest piqued, I followed up with Internet sleuthing sufficient to warrant a pair of items, today and tomorrow, here at SimanaitisSays.

Motoring in America: The Early Years,

Mrs. Linz’s husband owned (or possibly co-owned) United Motors of San Francisco. According to Sloss’s article, she learned to drive sometime prior to 1905. Thus, she was a real pioneer with “motors,” as they were called then. Sloss writes, “Mrs. Linz has had her share of the exciting experiences which the Far West provides for the automobilist.” For instance, after the giant San Francisco earthquake on April 18, 1906, “with only a thin waist and petticoat over her underclothing, she drove steadily for two days carrying women and children and even exhausted soldiers to shelter.” 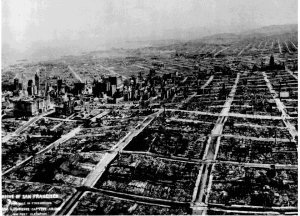 A view of the devastation, as photographed from kites flown above San Francisco after the 1906 earthquake. Photo by George Lawrence.

On a happier note, The San Francisco Call, May 20, 1907, reported “Motorists Delighted With Trip Over The Mountain Roads.” This endurance run started at the corner of Van Ness and Golden Gate Avenues in downtown San Francisco, wound its way down the coast well past Half Moon Bay, then inland over the mountains to La Honda, not far from today’s Portola Redwoods State Park. Fifty-four cars started; 34 completed the round trip of around 100 miles. 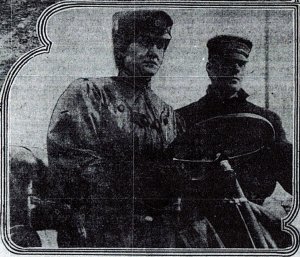 Among these 34 finishers was Mrs. F.J. Linz piloting her Maxwell. She lost 5 points in endurance scoring for needing to replace a faulty spark plug with one she’d regapped herself en route. Her 995 score placed Mrs. Linz 25th overall, the only woman entered and ahead of nine men, not to say the other 20 men who failed to finish.

“Mrs. Linz Displays Pluck,” the subhead read. The San Francisco Call continued, “On the way home, a man leading a horse on a long halter rope allowed the animal to take up the whole road. It became frightened, and Mrs. Linz, in avoiding a collision, skidded into a fence. This stop was not penalized. When she came across the finishing line, she was presented with a handsome bunch of red carnations.”

From The Outing Magazine: “Mrs. Linz, California’s Most Famous Woman Motorist, Receiving the First Prize Cup from the King of Portola.”

Alas, I know even less about the king than I do about Mrs. Linz. On the other hand, the Portola California Redwoods aren’t far from La Honda.

Tomorrow, we’ll pick up Mrs. Linz with those Nevada miners and their baths and that famed beauty. ds