IT’S SORT OF Christmas early: The instructions read “Not Suitable Under 15 Years of Age. Tools Recommended: Modelling Knife, Tweezers, Instant Glue.” They neglected to add “Helpful To Have The Touch of a Brain Surgeon.” 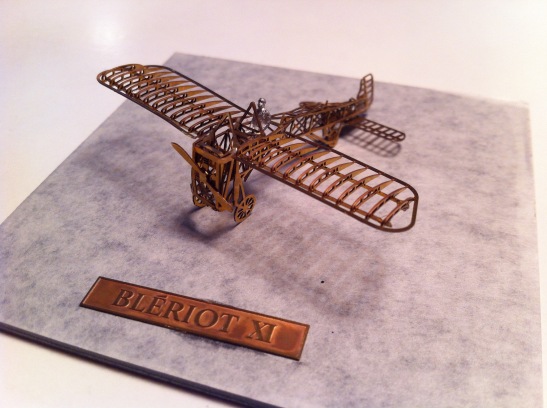 This is by far the smallest model aircraft I’ve ever attempted to build. The Aero Base microWing Blériot XI measures 58 mm (2.28 inches) from wingtip to wingtip. The 1909 Blériot XI was the first to fly the English Channel. It had a span of 25 ft., which makes the model around 1/130-scale, though its Japanese packaging says 1/160 microWing series.

Either way, the kit is well done, but not for fumble-fingers. It consists of a single sheet of what feels like thin brass, with the components die-cut and suspended on tabs. There’s also a pot-metal pilot, about the size of a grain of rice. Instructions are straightforward. 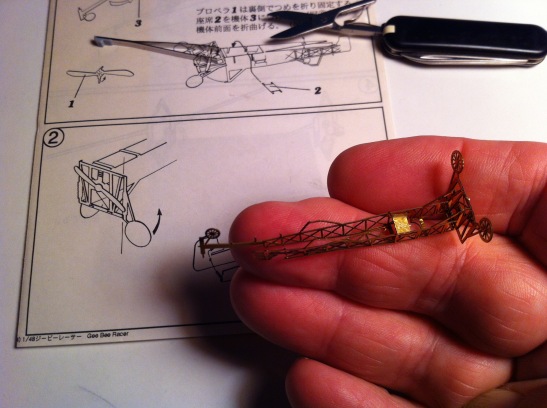 I found myself wishing for a pair of microspecs, the sort worn by dentists or, come to think of it, brain surgeons. Instead, Amazon came to my rescue with a Helping Hand with Magnifying Glass. At $5.43, it’s priced as an Amazon “Add-on item” that worked out perfectly with my other holiday shopping.

The gizmo’s adjustable alligator clips proved useful for holding the model while the glue firmed up.

In truth, I screwed up the fuselage with my first attempt, done before the Helping Hand arrived. Tabs fit into appropriate slots, but you have to see them first.

The wings are particularly well rendered: Tweezers are used to twist the flat sheet’s ribs the necessary 90 degrees. 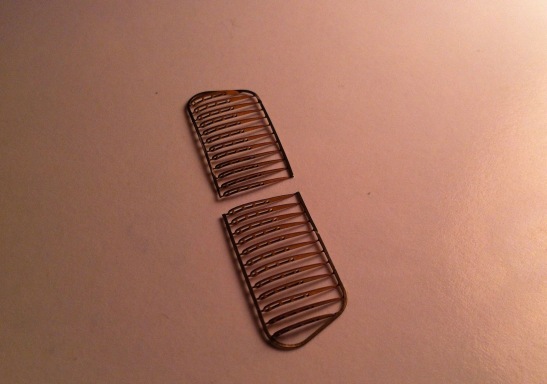 The tiny cloche, Louis Blériot’s control wheel, is incorporated into one of the aircraft’s wing spars. The triangular portions are part of the strut structure for the wing warping. That is, the Blériot didn’t have ailerons; it achieved roll control through wires warping the entire wing.

The kit comes with its own faux-marble base to which a Blériot XI nameplate can be affixed. Once the necessary tools–and state of mind–are assembled, the building takes a pleasant few hours.

It looks like it has rather more pieces, though the wing ribs aren’t as elegantly rendered.

I hope your Christmas is a merry one! ds .