WITH GASOLINE AS cheap as it is, battery electric vehicles in the U.S. aren’t exactly selling like hotcakes–or full-size pickup trucks either. Yet, automakers are covering their electric bets in any way they can, faced as they are with the 2025 54.5-mpg requirement.

And if the 2016 Paris Motor Show in October was any indication, Europe’s tightening CO2 regulations (equivalent to stringent mpg targets) are promoting automaker BEV Love to the point of outright game-playing.

All of this is fun to watch from afar, with the help of two issues of Automotive News, October 3 and 10, 2016. The earlier one has “Second-Wave EVS: Automakers chase sales with greater range and lower prices,” by Dave Guildford. The followup has “How GM Pulled a Fast One on EV One-upmanship.”

Here are tidbits from both stories, with a bit of Internet research on my part.

It’s not exactly pants-on-fire prevarication, but some pants must be at least a little warm over the BEV Renault Zoe, a result of the alliance between this French company and Nissan.

Paris show signage announced, “400 km. 100% Electric. Now.” The 400 km works out to 248.4 miles, which a British Zoe website rounds to 250 miles. Okay. But, as Automotive News notes, this range is “based on the extremely generous New European Driving Cycle testing. (A Nissan executive later said the Zoe would get around three-quarters of this in real-world driving.)”

Let’s see. Three-quarters of 250 is 187.5, not bad for a BEV these days. And, in fact, fine print claims 186 miles in summer; 124 in winter (when battery loads increase while, perversely, battery efficiency drops). 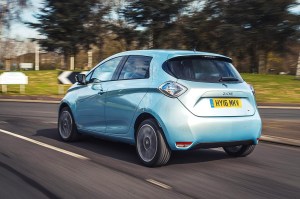 There’s real real-world experience reported in the British Car magazine, which has had a Renault Zoe for long-term test. After three months, the magazine notes, “The Zoe is proving a brilliant family runabout.” On the other hand, as to real-world range, one driver wrote, “Range, depending on factors such as weather, geography and how badly I drive it should be anywhere between 70–100 miles. Which could be ideal as the car is for running the kids to ballet, football, golf, horse-riding and school without ever leaving the county.”

The magic claim of 400 km/250 mile gave rise to a story concerning GM and its Opel Ampera-e, the Euro counterpart of the U.S. Chevrolet Bolt. According to Automotive News, a GM spokesman said, “Until Paris, we told the world the [Opel] Ampera-e had 250 miles. Renault matched that number. Then we kicked that number’s ass with 310 miles.”

The Opel Ampera-e, Euro cousin of the Chevrolet Bolt.

The Chevrolet Bolt and its U.S. numbers make for a comparison. The U.S. Environmental Protection Agency has a complicated means of rating BEVs, one that has seemingly proved useful. It cites a total of four values, the most straightforward being range, the other three MPGe, mpg-equivalents for its City Cycle, Highway Cycle and Combined, this last being a 55/45 split of these other two, respectively. 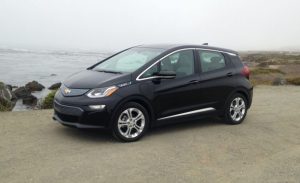 A 238-mile+ Chevrolet Bolt. Image from Car and Driver.

Makes you proud to be plugged in and ‘Merican. ds