THE INTERNET IS often likened to the Wild West because of its unruly activities, but today’s internet is fairly orderly in comparison to the early days of aviation. I’ve already described Wrights vs. Curtiss, Voisin vs. Wrights and various shenanigans of Gabriele d’Annunnzio, Harry Houdini, Cecil B. DeMille and Jules Védrines.

, by D.D. Hatfield, Northrup Institute of Technology, 1975. Veracity, or at least some indication of company longevity, comes from World Encyclopedia of Aircraft Manufacturers: From the Pioneers to the Present Day(2nd Edition)

The Wright Company, 1913. This and the following images from Aeroplane (Or Flying Machine) Scrap Book Number 3.

Courtroom squabbles aside, both the Wrights and Glenn Curtiss had legit marketing, both running flying schools that enhanced the number of pioneer aviators. The Wright School of Aviation, in Dayton, Ohio, continued “under the personal supervision of Mr. Orville Wright.” (Wilbur Wright died of typhoid in 1912.) Tuition in 1913 for a complete course was $250 (about $6100 in today’s dollar).

Curtiss ran two schools, one in Miami, the other in San Diego. As with other schools of the era, their graduates found a livelihood, at least for a while, in exhibition flying as well as in the military. 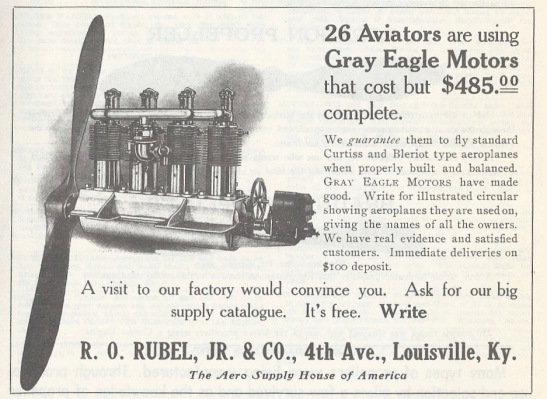 Other companies were perhaps less clear in their marketing. For example, R.O. Rubel, Jr., & Co. was a leading aeronautical supply house. However, “26 Aviators are using Gray Eagle Motors that cost but $485.00 complete” has two discomfiting aspects: Do you really want your aeroplane to have the cheapest engine? And is that “26” easily increased or decreased accordingly?

Rubel also advertised complete kits copied from existing craft. Among these were the Blériot XI (misidentified in its ad as XL) and the Curtiss. This, author D.D. Hatfield notes, was “legally permissible; however, they must be termed ‘Curtiss Types,’ ‘Blériot Types,’ etc.”

An odd state of affairs, what with the Wrights taking Curtiss to court over the question of lateral control, a more subtle matter indeed than outright copying. 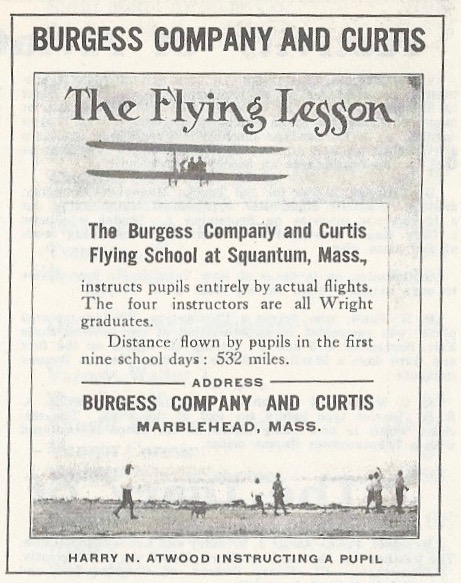 What a fortuitous second name for an aviation business: Burgess Co. & Curtis (albeit missing the second “s”). According to Gunston, back in the Teens this company built a selection of Farman, Curtiss, Grahame-White, Dunne and Wright aeroplanes under license. 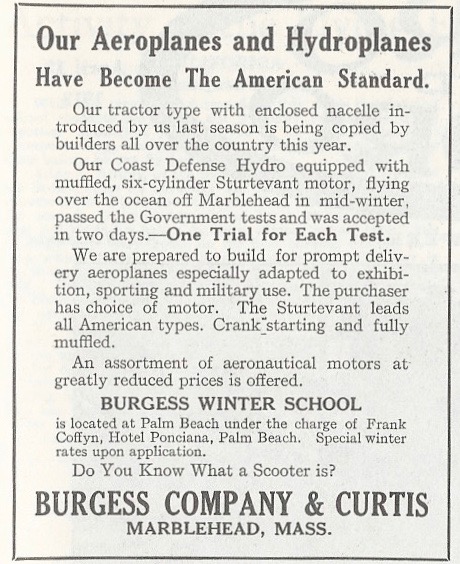 Tip-toeing on one name association, the company stumbled on another: The Burgess Winter School, located in Palm Beach, was “under the charge of Frank Coffyn.”

Apparently not a problem for W. Starling Burgess. His company became a division of Curtiss in 1917. Between 1930 and 1937, Burgess created three America’s Cup-winning J-Class yachts. And in 1933, he designed Buckminster Fuller’s Dymaxion automobile.