THE NAME “BOEING” conjures up an image of the majestic 747 airliner or the mighty B-17 Flying Fortress and war-ending B-29 Superfortress. In fact, though, Boeing made its early reputation with pursuit planes, fighters and mail planes. And, indeed, its first bomber, the Boeing B-9, evolved from a single-engine mail plane. 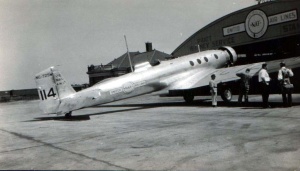 Important to development of the Model 200 and B-9 was the 20-foot wind tunnel built in 1927 and operated by the National Advisory Committee for Aeronautics (predecessor of today’s NASA). Engineers at this facility in Langley, Virginia, developed what came to be called the NACA cowling, a streamlined engine cover that increased one aircraft’s top speed from 118 to137 mph. Other NACA Langley research confirmed that retractible landing gear could decrease drag by 40 percent.

It was hot aviation news in 1931 when Boeing introduced the B-9, the first all-metal monoplane bomber used by the U.S. Army Air Corps. The ad read, “When a manufacturer of world-famous military pursuit planes decides to build a bomber, you naturally expect a departure from the ordinary…. Boeing engineers have, indeed, developed a bombing plane of radically new type. Designed to carry a crew of five and bombs weighing more than a ton, this twin-motored, all-metal monoplane takes off, retracts its landing gear and decidely out-performs any other large bomber ever built!”

Hitherto, U.S. bombers has been biplanes with plenty of fabric-covered surfaces. Like its Model 200 predecessor, the B-9 had a semi-monocoque fuselage with stressed skin construction. Its single wing had a NACA-optimized airfoil and cantilever design (that is, it required no external wire bracing).

Above, this Keystone B-6 biplane bomber was typical of the American bomber force until 1932. Below, the Boeing B-9, introduced the year before. These and other images from aviation-history.com.

Another B-9 innovation shared with the Model 200 mail plane were its landing gear, today termed semi-retractible in that portions of the tires remained unenclosed.

The B-9 shared open cockpits with its P-26 pursuit plane sibling. Image from Britannica.com.

Aviators were reluctant to give up the direct sensing of their aero environment. Advanced though it was in many ways, the B-9 had open cockpits for its pilot, copilot/bombardier residing directly ahead of the pilot, and gunners in the nose and midsection. Only the radioman was enclosed.

First flown in April 1931, this “mystery” bomber was dubbed the “Death Angel.” In one trial evaluation, a B-9 proved capable of evading state-of-the-art pursuit planes. In another, it posted a top speed of 186 mph, right up there with the fastest U.S. fighters of the era. An article in Modern Mechanics called the B-9 a “veritable flying fortress.” A catchy name, this.

It didn’t take long, though, for the B-9 to be eclipsed. Its light armor and only a pair of Browning machine guns would have made it vulnerable to attack (the B-17 was to have 11 guns). And its biggest problem was a lack of internal bomb bay: Its four 600-lb. bombs were mounted under the center wing, thus creating drag that increased the bomber’s vulnerability.

Alas, an internal bomb bay would have required extensive redesign of the B-9’s semi-monocoque fuselage. As noted at Aviation History Online Museum, “… it turned out the shortcut to create a bomber from a mail-plane just didn’t work…. The total production [of Boeing B-9s] was seven aircraft.”

On the other hand, Boeing’s next bomber, appearing only four years later in 1935, started with a clean sheet. The result was the B-17, justifiably known as the Flying Fortress with a production total of 12,731. ds

This entry was posted on August 31, 2016 by simanaitissays in Vintage Aero and tagged Boeing B-9 bomber "Death Angel".