METHUSELAH AND THE BOMB

ABOVE-GROUND NUCLEAR weaponry helped researchers identify longevity of the Greenland shark, the world’s oldest known living vertebrate. Recently, a 400-year-old shark made the news; details of the research are given in Science, the weekly magazine of the American Association for the Advancement of Science.

“Eye Lens Radiocarbon Reveals Centuries of Longevity in the Greenland Shark (Somniosus microcephalus),” by Julius Nielsen et al, Science, August 12, 2016, is the technical paper, with a freely available abstract. “Greenland Shark May Live 400 Years, Smashing Longevity Record,” by Elizabeth Pennisi, is a summary article at sciencemag.org. Here are some tidbits.

The Greenland shark, growing to more than 16 feet long, is among the largest of carnivorous sharks. (The whale shark, as much as 40 feet in length, is a filter feeder.) It has long been suspected Greenland sharks attain their size through longevity, and the recent innovative research confirms this.

A first attempt was through analyses of backbone bits collected from sharks captured, typically in nets set for other fish, in the North Atlantic. However, no “growth rings” in the bones were discovered. Then researchers turned to radiocarbon dating.

They examined their sample sharks’ eye lenses and measured the various forms of carbon contained in them. Curiously, nuclear weaponry played a role in this.

Being carbon-based, all living creatures contain trace amounts of carbon-14, one of this element’s isotopes. What’s more, because of above-ground nuclear explosions in war and testing, from 1945 to 1963’s Limited Test Ban Treaty, there was a spike, a “bomb pulse,” of carbon-14 that occurred in the early 1960s. 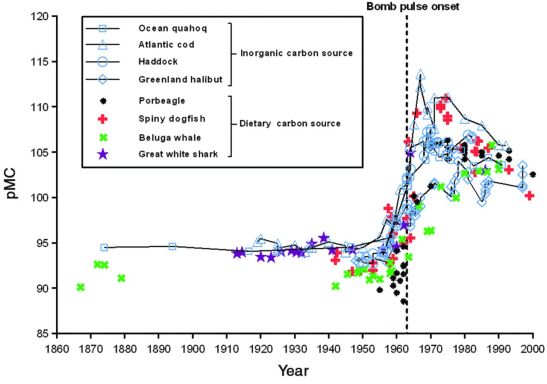 Radiocarbon chronologies of the North Atlantic. The vertical line indicates the bomb pulse’s effect on the marine food web. This and the following image from Nielsen et al.

By analyzing carbon-14 levels, researchers identified that two of their sharks, both less than 8 feet in length, were born after the tell-tale bomb pulse. Another small one was born right around 1963.
The researchers recognized that Greenland shark newborns are around 16 inches long. This fact and the data of their bomb-pulse sharks gave them a growth curve for estimating the ages of other sharks based on their sizes. 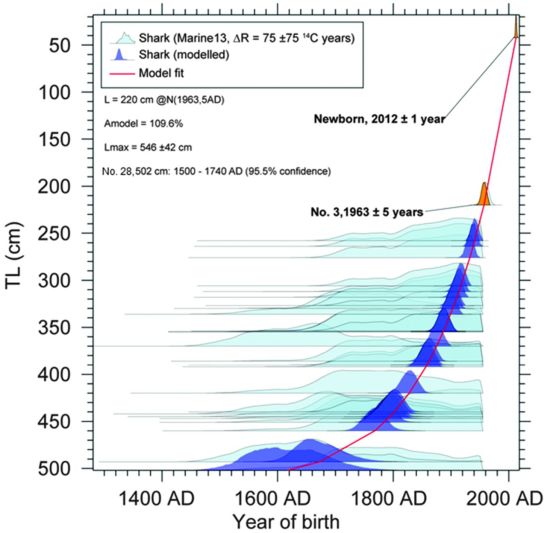 Estimates of age of Greenland sharks versus their size.

The most elderly shark in their sampling was 392 ± 120 years old. To put this in perspective, this particular shark would have been born about 1624, around the time Galileo got in trouble with the Roman Inquisition for doubting the earth was the center of the solar system.

The researchers’ findings suggest that the Greenland shark is the oldest known of living vertebrates, by far. Bowhead whales, at just beyond 200, are the oldest mammals. Some koi fish live to more than 200. There are records that a tortoise may have survived to an age of 255.

Among those without backbones, a North Atlantic chowder clam, a type of ocean quahog, was found to live 507 years. Sponges can live more than 2000 years. A ring count of one bristle-cone pine tree estimated its age at 5065. All bets are off with clonal plant or fungal colonies, as they’re not really individually alive.

But members of the Greenland shark family certainly are. For example, given the size of most pregnant females, nearly 13 feet in length, they’re at least 150 years old before having young.

As AAAS author Elizabeth Pennisi observes, “Imagine having to wait a century to have sex.” ds