Implication versus its inverse. Mom says, “If you don’t stop that, you’re getting no ice cream!”

What if he does stop and she doesn’t give him any ice cream? Can Little Murgatroyd protest mom’s lack of logic?

Her original statement is an implicational statement of the form Not P → Not Q, where P is stopping the bad behavior and Q is getting the ice cream. However, “nots” don’t cancel out: P → Q is logically a different kettle of er… ice cream.

For instance, consider “If it’s too sunny, let’s eat inside.” This says nothing about plans if it’s not too sunny. Maybe it’s raining or snowing.

Logically, what mom really means is, “If you stop that, then you’ll get ice cream.”

On the other hand, her original statement sounds properly threatening. Her correctly logical version sounds slyly inveigling, doesn’t it? Maybe mom is right to be illogical.

Syllogism and the fallacy of the undistributed middle. A syllogism starts with two or more truths, and then uses logic to reach a conclusion: “All men are mortal. Socrates is a man. Therefore Socrates is mortal.” 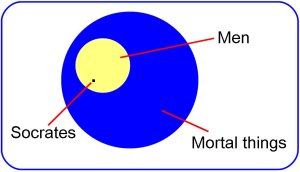 A Venn diagram displays the logic of this particular syllogism.

This Venn diagram shows the fallacy of the undistributed middle.

The fallacy lies in one or more of the premises being less than inclusive. This is the undistributed middle.

Correlation versus causality. Correlation is a mutual relationship between two or more things. Statistically, there’s an interdependence of variables.

By contrast, as the word suggests, causality is a relationship describing cause and effect; one thing logically or scientifically leads to the other.

Both correlation and causality are useful in science. But they are different. For instance, there’s a factual correlation between alcohol sales in a community and its teachers’ pay. Loosely, the higher the teachers’ incomes, the more booze is sold.

Of course, the fallacy here is confusing correlation with causality. If there is any causality, it’s between a community’s affluence (the cause) and what it does with its money (the effect).

Word order matters. The order of words in a statement affects its meaning. My favorite example of this appeared here at SimanaitisSays: “Flabby Fun with the Word ‘Only.’ ”

Briefly, consider the basic statement, “I poked him in his eye.” Next, put the word “only” in each of the seven possible places in this sentence.

Of these seven new statements, only three share the same logical meaning. Try it! ds

This entry was posted on July 16, 2016 by simanaitissays in Sci-Tech and tagged correlation versus causality, implication versus inverse, logic and illogic, syllogism and fallacy of undistributed middle, Venn diagram.