IN HIS MOTORSPORTS satire The Grand Prix of Gibraltar, Peter Ustinov described the hyper-technical Schnorcedes as having perfect weight distribution: Its driver sat neither left nor right; what’s more, his handkerchief had to be in a centrally located pocket of his driving suit. 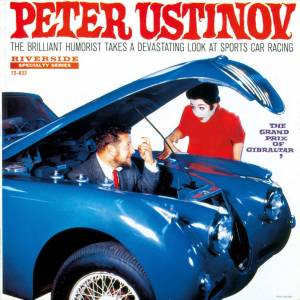 In the real world, several sports cars have had centrally located driving positions, among them a Ferrari, a McLaren—and a Kieft.

The first two are easily dealt with. The 1966 Ferrari Tre Posti 365 P Berlinetta Speciale had coachwork by Pininfarina beneath which resided a 4.4-liter mid-engine P2 competition chassis. 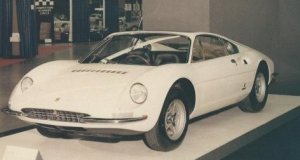 The Tre Posti did the world’s motor show circuit at Paris, Earl’s Court in London, Brussels, Geneva and Los Angeles in 1966. It’s now in the Simone Foundation Automobile Museum in Philadelphia, Pennsylvania. A second Tre Posti was built for Fiat head Gianni Agnelli.

The 1992 McLaren F1 was designed by Gordon Murray. Its staggered one-plus-two seating was, as Murray said, “to create the purest driver’s car, a new beginning, a design which simply re-writes all existing standards.”

Sixty-four road versions of the McLaren F1 were built between 1992 and 1998. Prototypes and several racing variations added another 42 examples. Owners include Elon Musk, Jay Leno and the Sultan of Brunei.

Kieft sports cars had a centrally located driving position in 1954, beating the Ferrari Tre Posti by more than a decade, the McLaren by almost four decades—and even Ustinov’s Schnorcedes by four years.

Cyril Kieft, a British steel industrialist, collected stamps and Welsh china and dabbled in motorsports. In 1949, he gave racing a try in Britain’s fledgling 500-cc Formula 3 class, but decided his métier was in design and fabrication, not driving.

Kieft left the driving to others, including a young man named Stirling Moss. Stirling, his manager Ken Gregory and Cyril formed Kieft and Company Limited. With Stirling at the wheel, the Kieft won the British Formula 3 Grand Prix at Silverstone, the Goodwood International, the Dutch Grand Prix and other F3 events in 1951.

In 1952, Moss moved on to Cooper’s Formula 3 effort. Don Parker drove Kiefts to the 1952/1953 Autosport championship, ahead of Moss and another F3 driver named Bernard Ecclestone.

Central seating was an optional feature; other Kieft sports cars had conventional driver locations. Of perhaps a dozen 1100-cc Kiefts built, Bonhams cites three centrally steered examples in addition to the red car here: one in Belgium, one in Switzerland and another in Italy. I saw this last one, LDA6, at a running of the Mille Miglia Retrospettiva. 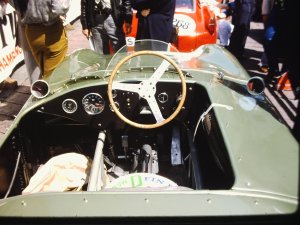 A center-steered Kieft seen at Donnington Park circuit in 2002. Image from the Kieft entry at historywebsite.co.uk.

Cyril chose to go back into a denationalized steel industry in 1956; Kieft cars closed up shop in 1961.

But not before setting a precedent for the likes of Ferrari, McLaren—and Ustinov. ds