THE MUSIC OF AVIATION

AVIATION HAS provided significant inspiration for music. And I’m not just talking about titles such as Flying Down to Rio or Der fliegende Holländer. I’m thinking of classic musical pieces with aviation as their central theme.

Here are several I enjoy. Maybe you’ll contribute others. 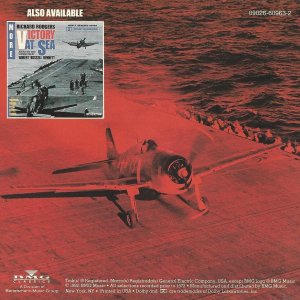 A standard pop song comes from the music for Victory at Sea, an NBC TV documentary, 1951 – 1952. One of its themes, “Beneath the Southern Cross,” recurred as “No Other Love Have I,” first heard in the 1953 Rodgers and Hammerstein musical Me and Juliet. Another, “Theme of the Fast Carriers,” celebrates the importance of seabased air power.

Another TV documentary, Air Power, was a joint effort of CBS and the U.S. Air Force, broadcast 1956 – 1957. Its music was composed by Norman Della Joio, collected in his Air Power Symphonic Suite. Its movements include “Skylarking,” “Air Battle,” “Safe Return,” and “The Liberators and War’s End.”

Few battles were more decided by aviation than the Battle of Britain, when Royal Air Force Hurricanes and Spitfires destroyed Hitler’s plan of terrorizing the country by air prior to invasion. British composer William Walton wrote Battle of Britain to commemorate this. Its movements are “Spitfire and Battle in the Air” and “March Introduction. March and Siegfried Music.”

Walton’s “Spitfire” Prelude and Fugue is also on the album, together with A Wartime Sketchbook, Suite: “Escape Me Never” and “The Three Sisters” Music for the Film. The entire album is celebratory British music of the highest order.

The album cover of an RAF Catalina flying boat identifying a Nazi sub suggests the subjects of Classic British Film Music. Its pieces include Coastal Command, by Ralph Vaughn Williams; The Red Shoes, by Brian Easdale; Attack and Celebration, by Gerard Schurmann; and Conquest of the Air, by Sir Arthur Bliss.

Again, stirring music throughout. I especially like the Bliss piece, its movements including “The Wind,” “The Vision of Leonardo Da Vinci,” and “Gliding.” 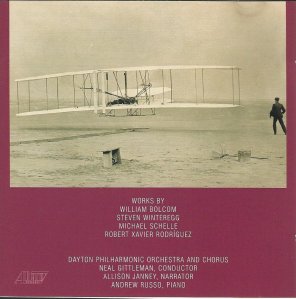 A Celebration of Flight is most appropriately performed by the Dayton Philharmonic. The music spans the earliest aerial activity of mythology’s Daedalus and Icarus to the achievements of two brothers from this Ohio city.

William Bolcom’s Inventing Flight includes “Daedalus and Icarus,” a movement for cello and orchestra; “Leonardo,” celebrating this Renaissance polymath; and “Wilbur and Orville.”

Steven Winteregg’s To Fly Unbounded has a “Hymn of Determination” for soprano and “Flight into the Unknown” for chorus. Michael Schelle’s Wright Flight is for solo piano.

Robert Xavier Rodriguez’s Flight: The Story of Wilbur and Orville is a cantata for orchestra with narrator voicing the experiences of the Wrights’ sister Catharine. The Rodriguez piece is my favorite of the album, indeed, my favorite of the collection. ds

2 comments on “THE MUSIC OF AVIATION”