“AUTOMOBILE TOURING on the Pacific Coast is altogether a different matter from that of tooling about the East.” This claim comes from Charles Fuller Gates, a travel, bicycle and motoring journalist of the 20th century’s first decades. His “Touring in California” article, published in The Automobile Magazine, November 1901, gives an idea of motoring along the Pacific Coast. There were challenges a’plenty from hills and horses with support provided by a blacksmith shop and Chinese cook.

Charles Fuller Gates, in a 9 H.P. Winton, and E.B. Waterman after a six-day tour. This and other images from Motoring in America: The Early Years, edited by Frank Oppel, Castle, 1989.

Gates compares his California tour to his other automotive adventures: “The writer lately returned from a six-day tour in company with E.B. Waterman, of Los Angeles, in a 9 H.P. Winton carriage that gave more pioneer auto touring experience than half a dozen trips from Chicago to Buffalo…. Here in this great State of California we have a number of veritable deserts, rivers that are bottom side up, mountains galore and a greater variety of roads and trails than can probably be found in an equal territory anywhere on earth.”

In particular, Gates observes, “North of San Francisco, mountains shut in a third of the State, which is still heavily timbered and very thinly settled, outside of the mining country which of course is quite mountainous. Los Angeles is a metropolis of the southern part of the State, and this southland may in time be set apart as a State by itself.”

Curiously, in the century following, Los Angeles hasn’t been perceived as cause of any potential split. An occasionally discussed new state of Jefferson would encompass California’s northern third and southern Oregon. In 1989, the National Public Radio station KSOR in Ashland, Oregon, rebranded itself as Jefferson Public Radio. Various counties in the region have since submitted official declarations of separation. 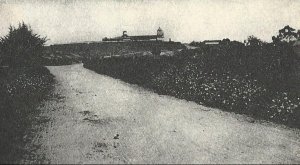 A typical road of the era, with one of the California Missions in the distance.

With regard to mountain grades, Gates notes, “Going south along the one hundred and fifty miles from Los Angeles to San Diégo, we climbed five in one days, snailing along all the forenoon up toward the sky on the hill-climbing gear until we reached the summit, on the very backbone of the range; then we coasted as fast as we dared….”

Of handling steep downgrades, Gates advises, “As the grade was frequently over 35 per cent, it was necessary to fly them. Old bicycle riders will understand what this means from experience.”

If your automobile is unable to climb serious grades, “you must stay in the town.” Gates summarizes ominously, “Of those automobiles that have gone into the Yosemite Valley, only two have come out with their own power. One was a little DeDion [sic] and the other a big steam carriage made on the original Stanley plan.”

However, a “Correction by Mr. Baird,” in The Automobile Magazine, December 1901, takes Gates to task on this claim: Writes M. T. Baird, one of the governors of the Automobile Club of California, “Last summer Mr. Albert Aiken and myself made a trip to the Yosemite in our machines, accompanied by our wives, and came out under our own power after being compelled to drive sixty miles in a buggy for the necessary gasoline—the stage company refusing to ship us our fuel, as they feared that if automobiles should make a really successful trip they would drive the stage line out of business.”

Baird also notes, “I have never heard of a De Dion making the trip or the Stanley spoken of in the article as making this trip. I think that the Locomobiles are the only ones that have ever accomplished it, or at least that have ever made any record of it in automobile circles on the coast.” 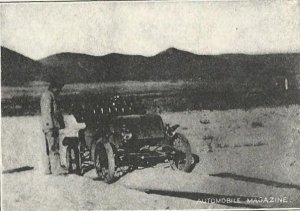 An early motoring term: “Railing” through a sandwash.

Encounters of the equine variety added interest: Gates observes, “It will be some time yet before California horses will accept the automobile with equanimity…. As soon as the city limits were left, horses that paid no attention to bicycles would execute all sort of foolish maneuvers in sight of the “mobes.”

Early names for automobiles included “motors,” as well as “horseless carriages.” “Mobe” is new to me.

“In one of the snapshot photographs sent with this article,” Gates writes, “is seen a four-mule team trying to tie up in a knot…. The only recourse left was to spend a half hour helping the mule ‘skinner’ persuade the team by. Fortunately Mr. Waterman thoroughly understood mules and horses….”

Nor were mechanical breakdowns avoided: “On the Coast route up from San Diégo, all one day was used in crossing a big ranch… a Spanish grant… about the size of Rhode Island. Midway across, we broke a front spring.”

“Naturally,” Gates says, “with a broken spring on a 1,600 pound automobile in the middle of the Los Flores Rancho, we were somewhat blue. But pounding on a few miles brought us in sight of the ranch house with its necessary blacksmith shop. The blacksmith was off to the other side of the ranch, but we were glad to try our own hands at the job, meanwhile bribing the Chinese cook to get us a lunch.”

I like to think Gates and Waterman tipped handsomely. ds

This entry was posted on March 16, 2016 by simanaitissays in Classic Bits, Just Trippin' and tagged "Motoring in America: The Early Years" Frank Oppel, "The Automobile Magazine" 1901, "Touring in California" by Charles Fuller Gates 1901, the state of Jefferson.