THE OCCASIONAL CRAZINESS of modern days reminds me from time to time about the Red Scare during the 1950s. Its hysteria included the Hollywood blacklists, as explored in the current movie Trumbo, an associated Lavender Scare promoted by homophobes and the coining of “McCarthyism” for a U.S. Senator’s vindictive attitudes. 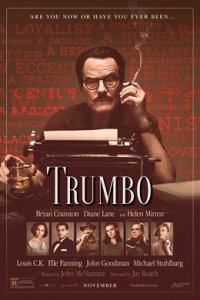 At its core, the Red Scare was a post-World War II response to actions of Soviet Russia. Not always reliable allies against Nazi fascism, the Soviet communists decimated any sense of cooperation with actions such as the Iron Curtain across eastern Europe and its 1948 – 1949 blockade of Berlin, leading to the allies’ Berlin Airlift.

The U.S. House of Representatives had set up the House Un-American Activities Committee in 1938, originally to uncover Nazi sympathizers in the U.S. In the post-war world, the HUAC changed its focus to the Communist Party of the USA (established in 1919, still in existence now and never outlawed per se) and to “fellow travelers.” These latter weren’t card-carrying members of the CPUSA, though the HUAC net was wide enough to capture friends of friends of those who might have once been associated with communists.

In 1947, ten Hollywood directors and writers, including Dalton Trumbo, were cited for contempt of Congress for their refusal to testify before the HUAC, essentially for refusing to name names. 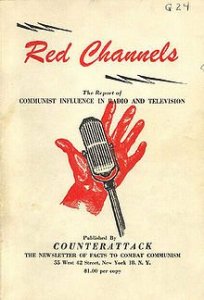 Red Channels: The Report of Communist Influence in Radio and Television, published by Counterattack, the Newsletter of Facts to Combat Communism, 1950.

In 1950, the ultra-conservative group Counterattack published Red Channels: The Report of Communist Influence in Radio and Television, which cast the net even wider. Red Channels named 151 actors, writers, musicians, broadcast journalists and others, some of whom had already been shunned for their background, political beliefs or association with communists.

In retrospect, the Red Channels list contains many people since exonerated of any leanings toward Soviet Russia. One example involves composer Aaron Copland. In 1950, Copland had been awarded a Fulbright Scholarship to study in Rome. Three years later, his stirring patriotic Lincoln Portrait was withdrawn from the 1953 inaugural concert for President Eisenhower. 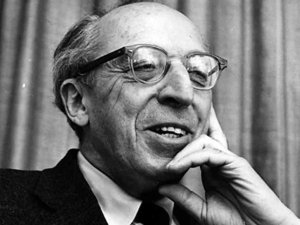 His red link? A life-long political progressive, Copland had given support to the CPUSA during the 1936 presidential campaign. However, in the post-war era he had soundly denounced Soviet policies and, in a 1954 Norton Lecture, he decried the loss of freedom under communism.

Being a fan of SiriusXM satellite’s Radio Classics, I have enjoyed Norman Corwin presentations as varied as “On a Note of Triumph,” celebrating the end of WWII and “The Undecided Molecule,” a whimsical trial of particle physics featuring judge Groucho Marx.

Also, “Sam Spade” listeners are aware of the program’s 1951 firing of lead actor Howard Duff and its deleting any mention of Dashiell Hammett involvement. Hammett had been found guilty of contempt of court for refusal to cooperate in investigations of the Civil Rights Congress, a group identified as a communist front. Duff’s chief transgression appears to have been an appreciation of the detective novels of Dashiell Hammett.

As its name suggests, the Civil Rights Congress had as a primary purpose the defense of African Americans. Not long after its 1946 founding, however, the CRC became a target of the HUAC and the Federal Bureau of Investigation. The FBI’s Matt Cvetic, later fictionalized in radio’s “I Was a Communist for the FBI,” testified to the HUAC that the CRC was communist controlled.

The CRC’s subsequent history included an attempted suicide of another informant and an FBI agent’s comment, “Anything that had a name ‘committee’ or ‘congress’ the FBI assumed had to be subversive.” 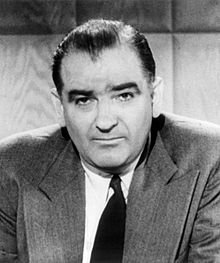 Today, the term “McCarthyism” defines defamation of reputation through unsubstantiated charges, making accusations of subversion or treason without evidence. Being a member of the U.S. Senate, Joseph McCarthy had no direct involvement with the HUAC, an activity of the House of Representatives. However, in 1950, McCarthy claimed to have a list of State Department employees who were “members of the Communist Party and members of a spy ring.”

Following this, McCarthy made additional charges of communism, communist sympathy, disloyalty or homosexuality within government and the larger society. One aspect of this, the Lavender Scare, led to the 1954 suicide of Senator Lester Hunt, whose son had been arrested on a charge of soliciting sex.

Following his tempestuous career in the Senate, 1947 – 1957, McCarthy’s tactics had disillusioned colleagues to the point of a Senate subcommittee, the Watkins Committee, recommending that he be censured. Among his transgressions were that he charged the Watkins Committee with “deliberate deception and fraud…, a lynch party…, an unwitting handmaiden of the Communist Party.”

Through a nuance of Congressional terminology, the Watkins Committee recommendation was changed to a condemnation rather than a censure. McCarthy said later, “I wouldn’t exactly call it a vote of confidence.” Then he added, “I don’t feel I’ve been lynched.”

Unlike, I suspect, Leonard Bernstein, Aaron Copland, Howard Duff and a lot of others. ds