THE BUDDHA’S TOOTH—WHO WOULD HAVE GUESSED?

IT MAY SEEM unlikely that I’m learning world geography, history and religion from old Sam Spade radio mysteries, but, in fact, this is how I first heard of Sri Dalada Maligawa, the Temple of the Sacred Tooth Relic of Kandy. In fact, I thought this hard-boiled noir detective’s Kandy Tooth Caper was pure fiction, an amusing follow up to his more famous involvement with the Maltese Falcon.

Who would have guessed?

Some background: Sam Spade made his debut in Dashiell Hammett’s 1930 novel The Maltese Falcon

It’s rather more complicated, but Sam is the good guy in The Maltese Falcon and these others are baddies.

The film’s 75th Anniversary is being celebrated by FathomEvents/TCM Big Screen Classics at cinemas nationwide. There are matinee and evening showings on Sunday, February 21, and Wednesday, February 24. FathomEvents’ website gives details.

Sam’s film popularity led to a radio series, The Adventures of Sam Spade, running from 1946 into 1951. Howard Duff pretty much owned the role until the Red Scare of the late 1940s forced sponsors to get a new Sam and do away completely with any mention of Dashiell Hammett. (Neither Duff nor Hammett was a Stalinist, but those were crazy times.)

These days, SiriusXM’s “Radio Classics” plays plenty of these radio adventures, including “The Kandy Tooth Caper.” This adventure had a multiple life, as Parts 1 and 2 on November 24 and December 1, 1946, then performed as a one-hour episode of the Suspense radio program, January 10, 1948. 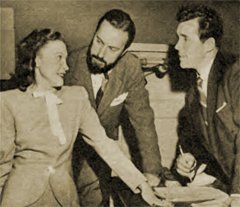 Sam/Howard Duff has his usual flirty interaction with office gal Effie/Lurene Tuttle, radio stalwart (and destined to be the mother-in-law of film music composer John Williams). Again, without spoiling the fun for those who might want to hear “The Kandy Tooth Caper” for the first time, I will say only that Effie looks up Kandy and tells Sam it’s in Ceylon (today’s Sri Lanka), the site of Dalada Maligawa, the Temple of the Sacred Tooth of the Buddha.

I was delighted by the caper being a sequel of the Maltese Falcon. And I assumed the entire tale was made up. However, only recently I was reading one of my used bookstore acquisitions, A Volume of Places Which Have Delighted, Intrigued and Intimidated Men, a compendium of “Travel in Space and Time” sort of straddling the genres of travel, history and geography. 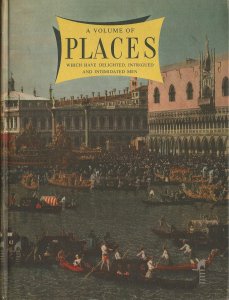 A volume of Places which have delighted, intrigued and intimidated Men, edited by Geoffrey Grigson and Charles Harvard Gibbs-Smith, Hawthorn Books, 1957.

Places is arranged alphabetically, from Abbasanta, where there’s a Sardinian castle built in the Bronze Age, to Zons, a medieval town on the western bank of the Rhine. All told, there are 390 places cited—including Kandy, City of the Tooth.

The Temple of the Tooth, Kandy. Image from A Volume of Places.

Its description is precisely what Sam learned from Effie and later from Gutman: “It was in the thirteenth century that the left canine of the Buddha was first enshrined here, thus preparing the way for the enormous veneration in which Kandy has long been held by Buddhists.

The Sacred Temple of the Tooth Relic today. Image from visitkandysrilanka.

“The story goes that a certain Guhariwa first found and worshiped it, to the annoyance of his Indian overlord Pendu. Pendu had it placed in a dish of burning charcoal, but the charcoal rose up in the form of a lotus, with the tooth in its centre; he caused it to be hammered, but it was the hammer that broke; he cast it into a sewer, but the sewer protected it by growing a beautiful tower. In the end, Pendu was converted.”

Or maybe that wasn’t the end. ds