QUICK, THE MOSQUITO SPRAY! NO, THE UNDERARM DEODORANT!

WHAT WITH the horrible Zika virus being mosquito-borne, an item in AAAS Science, January 4, 2016, caught my attention. Elizabeth Pennisi’s article “Orchids Give Off Human ‘Body Odor’ to Attract Mosquitoes” has a catchy title. Ah, but there’s more to it than this. 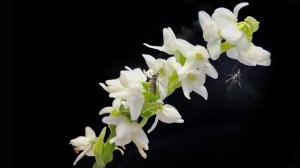 Orchids, Pennisi notes, “are masters of deception. To lure potential pollinators, some resemble nectar-laden flowers, yet offer no sweet reward. Others smell like rotten meat.” The bog orchid Platanthera obtusata takes a different approach to attract its pollinator: The orchid mimics the odor of the human body.

The obtusata portion of this orchid’s name is Latin for “blunt.” This bog-dwelling plant is also known as the blunt-leaf orchid or small northern bog orchid. It is not uncommon across much of colder regions of the Northern Hemisphere. 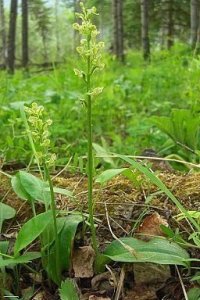 Blunt-leaf orchid in the wild. Image by Jason Holliger.

Chloé Lahondère and colleagues at the University of Washington have studied Platanthera orchids and their appeal to tiger mosquitoes. They placed air-tight bags over several Platanthera species to collect the plants’ odors. Then researchers analyzed chemical components of these samples through gas chromatography coupled with mass spectrometry. Last, they used an electro-antennogram technique coupled with gas chromatography to identify which scent components were attracting mosquitoes.

Several of these components were common among many flowers. However, others were chemicals found in human body odor. Notes Science author Pennisi, “Although the orchid’s ‘body odor’ is barely detectable by humans, it does set off electrical activity in the mosquito’s attennae, indicating it may very well attract the insects.” The researchers’ next phase of study is to carry out behavioral tests. 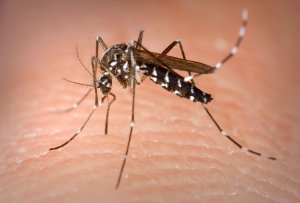 Tiger mosquitoes are the principal pollinators of Platanthera obtusata. This is a female Asian tiger mosquito, Aedes albopictus, preparing to feed.

One potential application of the research is particularly practical: The tiger mosquito is responsible for transmission of yellow, dengue and chikungunya fevers. Making matters worse, the insect tends to dwell among humans, rather than in remote wetlands. This research could lead to identification of natural chemicals used as bait in mosquito traps. ds