THIS JUST IN, FROM THE SCIENCE DESK

SCIENCE IS never over, be it climate science, planetary science or even basic physics. Two items coming across my science desk resonated, one with national news of a record blizzard, and the other with this website’s recent piece on Planet Vulcan.

Growing up in Cleveland, part of this country’s snow belt, I had first-hand admiration of winter wonders: Despite their apparent billions, no two snowflakes were alike. Only on January 22, 2016, did I read in The New York Times an article by Nicholas St. Fleur titled “Who Ever Said No Two Snowflakes Were Alike?” Kenneth G. Libbrecht, a physicist at Cal Tech, Pasadena, California, has created what he calls “identical twin” snowflakes.

By way of background, a snowflake grows in frigid conditions as it travels through a turbulent atmosphere. The fact that no two snowflake kernels experience the same twists and turns implies that they’re all different, at least in the statistical sense.

But what if they develop under exactly the same conditions, or at least as identical as practical science permits? Libbrecht has been studying snowflake generation for two decades, but only in August 2015 did he come upon a means of generating twins. “I started calling them identical twins because they are like identical people,” Libbrecht is quoted as saying. “They are too similar to just happen by chance, but not absolutely precisely identical to the last molecule.” 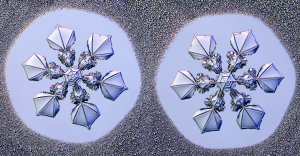 Identical twin snowflakes. This and following images constructed and photographed by Kenneth Libbrecht. Others can be seen at snowcrystals.com.

Libbrecht uses a laboratory chiller, with the snowflakes growing on plates of sapphire. By varying the temperature and humidity, he found that he could manipulate and predict their designs. He’s able to provide photographic proof using a photomicroscope specially designed to capture snow crystals.

Grown side by side, these twins are nearly indistinguishable.

At minus 10 degrees Celsius (14 degrees Fahrenheit), the shapes are flat. At minus 2 Celsius (28 degrees Fahrenheit), they’re triangular. The more humid, the more likely eccentric side branches emerge. Libbrecht also found that the flakes don’t actually grow on the glass surface. Rather, they sprout on microscopic nubs supporting the rest of the crystal.

Another pair of snowflake twins. The surrounding bits are water droplets.

His synthetic snowflakes can take from 15 minutes to an hour to grow. “We haven’t violated any laws of physics,” Libbrecht said. “We just found a loophole.”

At the other extreme of scale, planetary scientists, also at Cal Tech, have used the same techniques described here in “Planet Vulcan” to postulate a Planet Nine, a potential new member of our solar system. Konstantin Batygin and Mike Brown studied oddities in the orbits of small, icy bodies out beyond Neptune.

An imagined view of Planet Nine and the distant sun. Image from Caltech/R. Hurt (IPAC).

Based on their theoretical calculations, Batygin and Brown predict such a planetary body would have a mass about 10 times that of Earth and an orbit that’s, on average, 20 times farther from the sun than Neptune’s, currently our solar system’s most outlying planet. A Planet Nine “year” (that is, one of its trips around the sun) would take from 10,000 to 20,000 Earth years.

Anomalies of far-distant orbits led to conjecture of a new massive planet in our solar system. Data from Batygin and Brown; image by A. Cuadra/Science.

As yet, Planet Nine hasn’t been named officially. Nor has it been identified by telescopic means. On the other hand, given that their research suggests where to look, Brown is confident someone will spot this new planet within a few years. For more details, read the Caltech website item; for even more, check out Batygin and Brown’s paper “Evidence for a Distant Giant Planet in the Solar System,” in The Astronomical Journal, January 20, 2016.

There’s irony here, because it was Brown’s earlier planetary research that led to Pluto’s demotion from planet status.

I repeat: Science is never over. ds