THE FRENCH word flâneur has nuances of meaning: loafer, stroller, dabbler, dawdler, loiterer, yet somehow describing a person who’s anything but inactive in these activities.

Blaise Cendrars was a Swiss-born French modernist poet who qualifies as a flâneur, extraordinarily. He loafed in Montparnasse with artist Amedeo Modigliani and composer Darius Milhaud. He strolled figuratively across Siberia with a woman of the night. He dabbled in publishing, collaborating with artist Sonia Delaunay in a new genre of art and literature. He dawdled rolling his own cigarettes one-handed, having lost his right arm in World War I. And he can be seen loitering with his Alfa Romeo, a car customized by the artist Georges Braque.

Cendrars adopted his penname as metaphor of blaze and ashes, a phoenix rebirth. He wrote, “Writing is being burned alive, but it also means being reborn from the ashes.”

Throughout life, Cendrars was what the French call un type, a professional personality larger than life. In fact, biographers lament that Cendrars did his best to fictionalize his past, often engaging in implausibility, sometimes catching him short.

His apprenticeship with a Swiss watchmaker in St. Petersburg, Russia, is well documented. It was there, around 1907, that Cendrars wrote La Légende de Novgorode, 14 copies of which might have been published. As recently as 1995, a Bulgarian poet claims to have found a copy of a Russian translation, but its authenticity remains suspect.

Between 1907 and 1912, Cendrars stayed a while in Paris, then New York City, then returned to Paris, all the while getting involved in the international movement of Modernism. In 1913, he and artist Sonia Delaunay collaborated on La Prose du Transsibérien et la Petite Jehanne de France. The tale relates Cendrar’s experiences—or is it merely his imagination?—of a Trans-Siberian Express trip accompanied by Jeanne, a French lady of the night.

An example of the simultaneity genre, this work combines Cendrar’s free verse with Delaunay’s abstract accompaniment, all on a continuous panel that folds accordion-style. Wrote Cendrars, “…the edition should reach the height of the Eiffel Tower!” Alas, its planned 150 copies never materialized; perhaps 60 were printed. Surviving copies are held by major museums and libraries. A translation of its poem appears at Vagheggiando.

World War I interrupted Cendrars’ artistic endeavors. Indeed, but for his resilience, the war could have ended them. Serving in the French Foreign Legion, he lost his right arm in September 1915.

Cendrars returned to Paris and became a prominent member of its artistic community. Ernest Hemingway mentions seeing him at La Closerie des Lilas in Montparnasse, “with his broken boxer’s nose and his pinned-up empty sleeve, rolling a cigarette with his one good hand…. When he was lying, he was more interesting than many men telling a story truly.”

Nor did his wartime loss affect Cendrars’ travels or his driving. In The Ox on the Roof detailing avant garde composers of the era, James Harding observes of Cendrars, “With typical defiance, he refused the offer of a false limb and made himself play, and excel at, the most violent sports. He drove his racing car in a way that made people wonder if he was a fool or a hero…. None other than [artist Georges] Braque designed the coachwork of the Alfa Romeo sports car that Cendrars piloted for thousands of hair-raising miles through South America.”

Blaise Cendrars and his Alfa Romeo, 1926. Image (and some details of the car, in French) from Flâneur Quotidienne.

In the mid-1930s, Cendrars got involved with the movie industry in France, Italy and the U.S. Russian filmmaker Sergei Eisenstein interested Hollywood in the Cendrars novel, Sutter’s Gold. This 1936 bio epic flick of John Augustus Sutter turned out to be one of Universal Studio’s major flops of all time. On the other hand, most of its action footage was reused in 1939’s Mutiny on the Blackhawk. 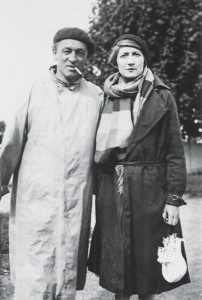 During World War II’s Nazi occupation of France, Cendrars became known to the Gestapo as a “Jewish writer of French expression.” After the war, he published extensive memoirs of WWI trenches, a traveling theater of gypsies, driving across a South American swamp, WWII intrigue and other adventures.

In 1961, Cendrars received the Paris Grand Prix for Literature. A few days later he died, at age 73.

Cendrars once wrote, “Literature is a part of life. It is not something ‘special.’ All of life is nothing but a poem, a movement…” ds

This entry was posted on January 5, 2016 by simanaitissays in And Furthermore... and tagged "La Prose de Transsiberian et la Petite Jehanne" by Cendrars and Delaunay, "Mutiny on the Blackhawk" movie, "Sutter's Gold" movie, Alfa Romeo modified by Georges Braque, Blaise Cendrars, Paris in the 1920s.