“CAR GAL” may not readily translate into Italian, but Baronessa Maria Antonietta Avanzo née Bellan certainly qualifies as one. Known as the Signora quattro pistoni (Lady of four pistons), Avanzo competed in the Targa Florio, did sand racing on a Danish island, teamed with Tazio Nuvolari, impressed Enzo Ferrari, swapped cars with Antonio Ascari, was invited to drive Ralph De Palma’s Miller at Indy, ran in four Mille Miglias and the Tobruk-Tripoli and, throughout a long, rich life, fought for women’s equality—all the while with undeniable charm. 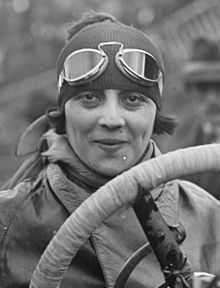 Maria took to things mechanical when her father taught her to drive his De Dion-Bouton tricycle. Her marriage to Baron Eustachio Avanzo before World War I reinforced her enthusiasm. The Baron, a wealthy landowner, was publisher of a sporting newspaper devoted to automobilism and aviation. He promptly bought her an S.P.A. HP to race.

Maria won her class in the 1920 Giro del Lazio after having replaced an errant wheel during the race. That same year, she ran the Targa Florio, the first woman to enter this rugged Sicilian open-road event. The record identifies her as Contessa Maria-Antonietta d’Avanzo, listed 12th of 19 entries. 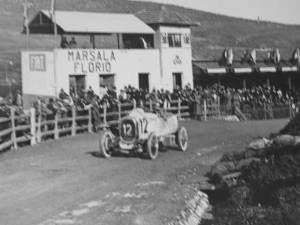 Avanzo’s Buick in the 1920 Targa Florio.

Avanzo’s stripped Buick failed in the third of the Targa’s four 67-mile laps; only seven cars finished. Coming 2nd in an Alfa Romeo 40/60 was a 22-year-old named Enzo Ferrari.

In 1921, Maria and her Alfa Romeo took the women’s cup at the Motor Sport Week in Brescia. Beach racing at Fanø, Denmark, her adventure with a 12-cylinder Packard had far-reaching implications. The car caught fire and, she wisely extinguished the flames by driving it into the North Sea. It’s said she impressed fellow competitor Enzo Ferrari with the Packard’s 12 cylinders, but she quipped that she’d gladly swap the car for a Fiat.

Antonio Ascari (father of grand prix great Alberto) overheard this remark. On Maria’s return to Italy, she found a new bright red Fiat awaiting her. Ascari quite rightly ended up with the Packard.

Later in 1921, at Italy’s Circuito Lago di Garda, Maria took the place of an ill driver on the Ansaldo team. A 28-year-old Tazio Nuvolari was a teammate in his first race on four wheels. Nuvolari finished 4th overall, 2nd in class; Maria, a respectable 7th overall, 3rd in class.

This same year, the Baroness was one of a group wielding honorary first shovels in construction of the Autodromo Nationale Monza.

In 1924, Maria and her two children “little more than adolescents” emigrated to Australia. While there, she participated in a match race at Penrith Speedway, a dirt track near Sydney, against local ace Fred Berry and his Alvis 12/50. The Baroness ran Fred Wither’s Essex Four, an intercity race car said to be unsuitably geared for the speedway. She lost the match race, but her 54.35-mph average compared well with Wither’s 56.2-mph speed in winning a later Australian challenge.

Chrysler 72. This model, commissioned by Chrysler, is of its 1928 Le Mans entry, two of which finished 3rd and 4th there. Image from scalemodelminiatures.com.

Maria returned to Italy in 1926. In 1928, she entered her first Mille Miglia, co-driving a 3.6-liter Chrysler 72 with Manuel de Teffé. A year later, she ran an Alfa 6C 1750 SS with Carlo Bruno. Maria took a break in 1930, but returned to the Mille Miglia in 1931, this time in a Bugatti Type 43. Mechanical ills forced retirements in all three.

In 1932, Avanzo’s Mille Miglia was a factory drive, with Alfa Romeo’s Scuderia Ferrari managed by her racing pal from the early 1920s. She and Francesco Severi co-drove an Alfa 6C 1750 GS, again plagued by mechanical problems. 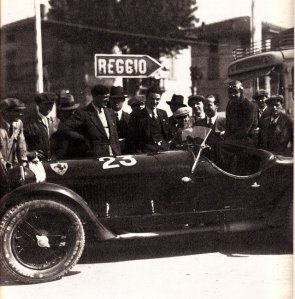 Avanzo’s factory drive in the 1932 Mille Miglia. Note the Scuderia Ferrari logo on the bonnet. Image from targoflorio.info.

This same year, she received an invitation from Italian-American Ralph De Palma to try an Indy car, no less than a Miller Special. Maria had to be granted a special license, as the Indy establishment of the era couldn’t fathom a woman driving their sacred oval. (Women weren’t even allowed in the pit area until 1971.)

Avanzo’s few laps were of limited success and came to nothing. Some say she wasn’t man enough for the Miller; others say she was called home to Italy because of a family crisis. My money is on the latter. 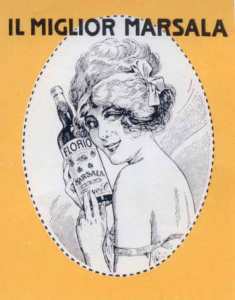 Florio: “The best marsala.” There’s no record of it, but Avanzo could have posed for this 1936 advertisement. Image from forum-auto.com.

Maria may have done other racing, but her only recorded event was the 1939 Tobruk-Tripoli race in North Africa. There, Avanzo finished 6th in the 1100-cc class in a Fiat. She submitted an entry for the 1940 Mille Miglia but didn’t follow through.

Two books, alas only in Italian, describe Avanzo’s rich life. She hobnobbed with the likes of Gabriel D’Annunzio, Ernest Hemingway, Pietro Mascagni (composer of Cavalleria Rusticana ) and Benito Mussolini. Italian film director (and Ferrari enthusiast) Roberto Rossellini was a nephew. Notes a translated review of Indomita, Maria was an “independent and emancipated woman… extraordinarily generous and unselfish…” She “faced life with great passion but even wise lightness, always free and lived… indomita.”

It’s quite enough to encourage one learning Italian.