THE PUPILS I have in mind here aren’t kids in a classroom, they’re the openings in eyeballs, adjustable for different lighting conditions through many evolutionary variations. I learned about these initially from Science, weekly magazine of the American Association for the Advancement of Science, with my usual followup of Internet sleuthing. (Image credits cite interesting articles.)

There’s a wonderful variety of pupil shapes, vertical slits, horizontal slits, segmented circles and others that are really bizarre. Why all these evolutionary options? 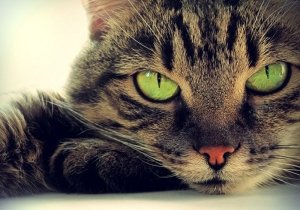 A cat’s vertical slits are beneficial in several ways. Image from lifescience.com.

Generally, vertically elongated pupils are beneficial to predators that are active both day and night. Alligators and crocodiles have them; so do cats. The vertical slit adjusts to extremes of light levels much better than a human’s circular pupil: A cat’s slit undergoes an area change of 135 times, from narrowest in bright sunlight to widest in the dark. A human pupil changes no more than 15-fold.

Another benefit of a vertical slit concerns judging distances. This depends on two aspects, stereopsis (the different views of left and right eyes) and blur (the fuzziness of things in front of or behind the point of focus). Analyses of optics show that both of these are optimized by vertical pupils.

By contrast, terrestrial animals with horizontal pupils are very likely to be prey, not predators. For example, in “Why Do Animal Eyes Have Pupils of Different Shapes?” reported in Science, researchers identified that of 42 plant-eating animals, 36 have horizontal pupils.

The goat shares horizontal slits with the gazelle, the zebra and other herbivorous mammals. Image from npr.org.

Horizontal slits, especially when combined with wide-spaced eyes, offer a sharp panoramic image, just the thing for detecting a predator before it’s too late. Once on the run across uneven terrain, this same horizontal view aids the animal in outmaneuvering a predator.

Horses, antelopes, goats and other horizontal-slit mammals have evolved another trick: As they move their head downward to graze, their eyes rotate as much as 50 degrees to keep the pupils even with the horizon. In fact, twisting their heads, they rotate their eyes appropriately for the same reason.

Cuttlefish pupils, not to say entire eyes, are highly optimized. Image from koryoswrites.com.

Aquatic environments give rise to other optimal shapes. The cuttlefish, for example, has a W-shape pupil with even more complexity within the eye. Shared with sharks, rays and skates, this pupil gives a wide-angle view, useful in such an open environment. What’s more, each cuttlefish eye has a pair of fovea, two distinct points in the retina that give optimal sharpness. This duality allows the eye to form two separate images, one looking forward and the other backward.

The tiger and lion share circular-segmented pupils with us. Image from The New York Times, August 7, 2015.

What about us poor humans with pupils of simple circular segments? We share similar evolution with other primates, wolves, dogs and large felines, lions, tigers and the like. Pupil shape appears not to be an evolutionary one-way street. There are incredible optimalities. ds

This entry was posted on October 15, 2015 by simanaitissays in Sci-Tech and tagged AAAS Science magazine, cat, cuttlefish, goat, lion, pupil shape in the eye, tiger.