TEMPERATURES TODAY in a few Southern California locales may hit three digits (Fahrenheit, thankfully). So I thought some tidbits about aircraft deicing and anti-icing might be cool. Maybe you’re familiar with the black leading edges of many aircraft wings. Maybe you’ve been on a modern jet as it’s deiced prior to takeoff.

An anachronistic image from Microsoft Flight Simulator: My 1920 Zeppelin-Staaken E-4/20 getting deiced with modern equipment.

The icing-up of its wings and control surfaces sent many an early aircraft to its doom. Pilots carrying the mail in biplanes learned to invoke quick little control inputs to dislodge formations of ice. 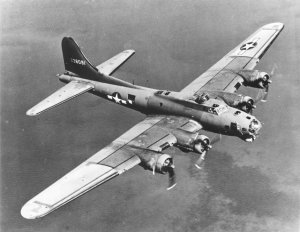 The black portions of leading edges on this Boeing B-17 Flying Fortress are rubber deicing boots.

To reduce in-flight ice accumulation, lower-speed aircraft have pneumatically actuated rubber boots on the leading edges of wings, stabilizers and rudders. Inflation/deflation causes the ice to crack and flake off. Turboprop and turbojet aircraft route their engine heat through ducts to exterior surfaces for the same purpose.

Aircraft deicing liquids of the 1950s were typically ethylene glycol, the same chemical used in the era’s automotive antifreezes. Since the 1980s, EG has been replaced by propylene glycol, similar in its anti-freeze properties, but less toxic. PG is considered GRAS (Generally Recognized As Safe) by the U.S. Food and Drug Administration.

An Aeroflot A330 Airbus is deiced at Moscow’s Sheremetyevo International Airport. Image from Russavia.

Today, there are two basic types of aircraft deicing/anti-icing fluids, both environmentally friendly variants of PG. Type I, orange for identification purposes, is formally a deicer providing immediate albeit temporary removal of ice and snow. This high-pressure mixture of PG and water is applied at around 95 degrees Fahrenheit from one or more cherry-picker trucks, each containing as much as 2000 gal. of the fluid. Run-off of Type I deicer appears as slush with a pink tinge earning the nickname “pink snow.”

Pink snow is forming on this aircraft being deiced at Copenhagen Airport. Image by File Upload Bot (Magnus Manske).

The other primary variety, Type IV, is an anti-icing fluid. Its unheated, undiluted PG is enhanced with a thickening agent. This anti-icing fluid is applied to retard any future accumulation of snow and sleet. For ID purposes, Type IV fluids are dyed green. Sometimes, both a deicer and then an anti-icer are applied in a two-step procedure.

Type II fluids, yellow in color, are intermediate to Types I and IV in their duration of effectiveness. Type III fluids, light yellow, are a compromise of Types I and II, intended for slower aircraft taking off at 100 knots (115 mph) or less. All of these characterizations arise from SAE International’s AMS 1424 and 1428, ISO 11074 and 11078.

Its orange color identifies this deicer as Type I fluid. Image from Aviation History.

Though toxic to mammals, EG-based deicers are still used in some parts of the world. Increasingly, those of the PG variety have evolved in their environmental friendliness. For example, one run-off hazard is a fluid’s COD, its chemical oxygen demand, a measure of its depletion of oxygen in adjacent waterways.

In 2008, the U.S. Environmental Protection Agency issued Effluent Limitation Guidelines. Related to this, AviationPros cited development of a hybrid compound of PG and glycerin that lowers COD by 25 percent. This product was evaluated by airlines at Chicago O’Hare in 2010 with positive results. ds

This entry was posted on September 24, 2015 by simanaitissays in Vintage Aero and tagged aircraft deicing/anti-icing, Type I deicer, Type IV anti-icing fluid.