ONLY RECENTLY, in researching “The Birth of Los Angeles TV,” did I learn that Auburn/Cord/Duesenberg auto mogul E.L. Cord was the C of Los Angeles classical radio station KFAC. (A was for Auburn; F, for Fuller, the local distributor of the marques). What’s more, KFAC was run-of-the-mill radio until Cord toured the place in 1945 and recognized thr station’s huge investment in classical music (a symphony could take a dozen 78-rpm records). Why not go full classical?

And so KFAC was classical from 1945 until its demise in 1989. Wife Dottie and I remember the station fondly, in part because of its idiosyncrasies. KFAC ran loose and friendly, for instance, sometimes broadcasting opera acts in the wrong order. It once played a Bach Brandenburg Concerto at the wrong speed.

Tom Dixon, one of the KFAC hosts, had a proclivity for such on-air goings-on, which prompted a listener named Sarah Lee to write that his show should be renamed “Music and Mistakes with Tom Dixon.” Thereafter, whenever he’d flub, he’d say, “Sorry, Sarah Lee.” We all understood and forgave him.

Beginning in 1953, KFAC AM and FM pioneered an early form of stereo broadcasting. It placed microphones at the left and right of Hollywood Bowl concerts and instructed listeners to place two radios seven to twelve feet apart, one tuned to KFAC 92.3 FM, the other to its 1330 AM frequency. Stereo FM broadcasting, introduced in 1961, obviated need for this.

Tom Franklin was a regular as the “Dean of Southern California Business Reporters.” I recall a particularly off-the-wall interview, with a long and involved depiction of some manufacturing process. At the end, Tom asked when it was coming to southern California. “Oh, these machines are really big,” the fellow said, “we have no plans whatsoever for your market.”

Wife Dottie introduced herself to Tom Franklin at an auto press event and told him that she depended on him for her Southern California business news. Hearing this commendation, he modestly scurried away like the White Rabbit in Alice’s Adventures in Wonderland. End of Wife Dottie’s interview.

She and I both enjoyed one of KFAC’s younger guys, Doug Ordunio, whom we affectionately called Douggor. His speciality was music of the avant garde, the sort of thing written for seven cellos, screeching soprano, harmonium and bus horn. 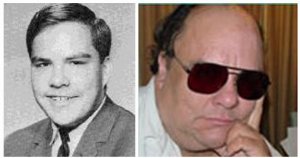 Doug Ordunio, California-born 1950; KFAC radio personality from 1973 to 1986. At left, Ordunio in 1967; at right, more recently. He continues as a writer of poetry, fiction and film criticism, and website designer for New Millennium Records.

Ordunio also ran KFAC’s “At Home With” series. To me, the best of these interviews were regular guest appearances of Nicolas Slonimsky, eminent musicologist, conductor, composer and musical raconteur. 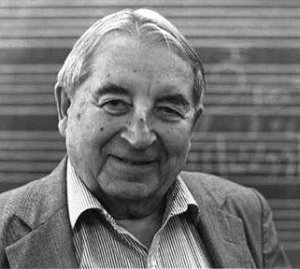 Slonimsky originally titled his autobiography Failed Wunderkind, but publishers preferred a more conventional, and accurate, Perfect Pitch. Douggor’s KFAC interviews with him were wonderful interactions of youth and age.

There’s a two-part video of a Slonimsky/Ordunio interview done in 1979; Ordunio was 29 at the time; Slonimsky, 85. It’s perhaps less outrageous than some of their interactions, but fun nonetheless and exemplary of Slonimsky the raconteur.

Another regular KFAC feature was Martin Workman’s “Luncheon at the Music Center.” As its name implied, it was a noon feature in which Workman chatted with musical notables on-location at the Dorothy Chandler venue. There were fascinating conversations with classical artists, provided one could hear them amidst crashing plates and clattering cutlery.

Wife Dottie remembers what occurred in January 1987, the first of KFAC’s death throes. It sounded like dear Martin Workman had a microphone wrenched from his hand amidst all the other lunchtime clatter.

KFAC, we remember you fondly. ds