EVERY FEW years, I feel compelled to reeducate myself on the workings of an automotive differential. There’s nothing particularly life-critical about this; it’s akin to doing crosswords left-handed when one is a rightie. Today, I offer you the same challenge (diff knowledge, not the southpaw action). Then there is a purely mechanical gizmo that miraculously always points south and a neat video that’s instructive and yet inexplicable too.

A History of the Machine, by Sigvard Strandh, A&W Publishers in association with AB Nordbok, Gothenburg, 1979.

I have several sources describing differentials, but A History of the Machine by Sigvard Strandh is noteworthy because of its immensely broad scope. The book’s nine chapters start “Without Tools, No Machines” and culminate in “The Machine, Our Daily Companion.”

Exemplary descriptions and illustrations are given of Newcomen’s atmospheric engine, Charles Babbage’s Difference Engine and Otto and Langen’s internal combustion engine. Even early man’s crafting of stone tools gets an artful treatment. 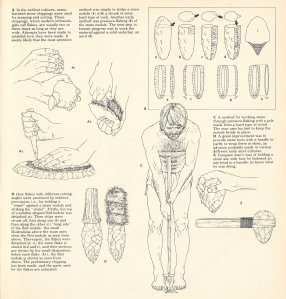 Stone-age man had remarkable tool-making ability. This and other images from A History of the Machine.

Here’s why a differential is an essential piece of modern automotive hardware: Traveling in a straight line, wheels on an axle rotate at the same rate. However, in a turn the axle’s inner wheel travels a shorter distance. If the wheels are linked to provide propulsion, a device is required to account for this rotational difference—a differential.

In a turn, an axle’s inner wheel rotates a shorter distance than its outer wheel.

In the drawing below, gear a gets its spin from the engine. Connected to this gear is cage b, holding gear e on axle halfshaft c and gear f on axle halfshaft d, these two gears intermeshed with freely spinning differential gears g and h.

At left, a differential responds to travel in a straight line. At right, it responds to a turn.

Now, imagine what happens when traveling in a straight line or through a turn. In a straight line, the two axle shafts rotate at the same speed and the differential gears rotate within their cage without spinning on their respective axes.

By contrast, in a turn one of the axle halfshafts rotates faster than the other, and the differential gears compensate for this difference by rotating about their own axes.

It’s possible that differential gears have been known since ancient times. Strandh cites such a device dating from two thousand years ago used to determine phases of the moon. Fragments of the mechanism were discovered by sponge divers in a shipwreck near the Grecian island of Antikythera in 1900. As only fragments exist, its differential nature is considered conjectural today.

Rather more documented, in third century A.D. a Chinese court minister and mechanical engineer named Ma Jun devised a south-pointing chariot. This directional compass is noteworthy in its purely mechanical nature requiring no magnet. Legend had it that such a device had been invented even earlier, by no less than the Yellow Emperor reigning 2698 to 2598 B.C. 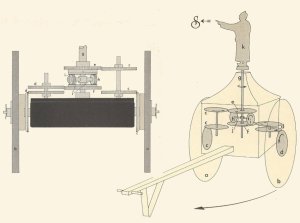 A south-pointing chariot, as reconstructed for the National Museum of Science and Technology in Stockholm, Sweden.

In a sense, Ma Jun’s two-wheel chariot operates like an inverse automotive differential. The chariot’s wheels are connected to differential halfshafts, one of the halfshafts receiving reversed rotation through auxiliary gearing. The chariot’s pointing statue is linked to a shaft that, in the modern sense, would be the automotive driveshaft. This assembly causes the statue’s shaft to rotate at a speed proportional to the difference between rotational speeds of the chariot’s two wheels.

At the onset of travel, the chariot’s statue is aligned to point south. As long as the chariot travels in a straight line, there is no difference in its wheels’ rotation, the statue’s shaft doesn’t turn, and thus it continues to point south.

When the chariot turns, its wheels rotate at different rates, and the differential compensates for the turn by continuing to point the statue southward. Neat, eh?

Alas, as Strandh notes, “each bump of its wheels due to uneven ground would distort its indication of the direction…. The designer was probably quite aware of these deficiencies, and it is likely that the south-pointing carriage was only used by those in power to show the people that their rulers had supernatural powers.”

In 1937, GM’s Chevrolet Motor Division produced Around the Corner, an educational film doing a wonderful job of explaining an automotive differential.

Oddly, the video begins with an extensive credit to “the Riders of Victor McLaglen, star of ‘The Informer’ and other famous Hollywood productions, for their co-operation during the filming of this picture.” Its trick motorcycle riding reminds me of the cop escorting R&T’s attendance to the inaugural Indianapolis Grand Prix, 2000. However, I see no connection whatsoever to differentials. For differentials, jump to 2:25 in the video. ds

3 comments on “UNDERSTANDING THE DIFFERENTIAL”

This entry was posted on September 4, 2015 by simanaitissays in Sci-Tech and tagged "A History of the Machine" by Sigvard Strandh, "Around the Corner" Chevrolet film on the differential, automotive differential, Ma Jun's south-pointing chariot.